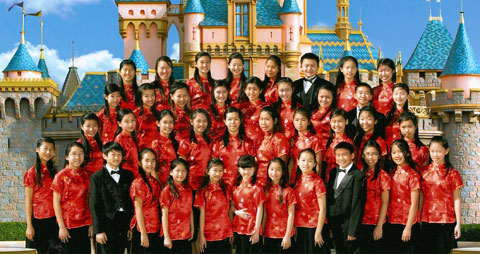 The San Gabriel Valley Children’s Chorus (SGVCC) was founded in 1998 by Mr. Samuel Lin. It is located in the city of Temple City, California, United States.

This group is formed with American Chinese children. The children are trained in their pursuit of musical enrichment and excellence, celebrated diversity through the study of choral music, and shared with the surrounding communities the cross cultural diffusion of musical traditions.

Besides the regular annual concerts and charity performances, their recent major accomplishments include: performed in the premiere opera The Travel of a Little Balloon at the Luckman Fine Art Complex in Los Angeles, co-hosted the concerts for the Taipei Philharmonic Youth Chorus From Taiwan, co-hosted the concerts for the Czech Children Lark Choir from Zidlochovice, Czech Republic in 2007, and invited to the 11th Japan International Youth Musicale at Shizuoka, Japan in July 2009. They’ve been giving concerts at the neighbor cities through out Los Angeles, and at San Francisco, Seattle, Vancouver, New York, Washington D.C., Hawaii, China, and Japan. They have been invited many times in participating in the Annual Los Angeles County Holiday Celebration events, they are the popular candidate of this main stream music event commissioned by the Los Angeles County Arts Commission.

This group employs a rich repertoire, which covers Motets of the Renaissance period, classical master works, contemporary choral works, folk songs and musicals. The chorus has proven its superb quality not only through beautiful harmony, colorful tone quality, sensitive musicality, but also by demonstrating its unique way of appreciating and interpreting music of all origins and times. 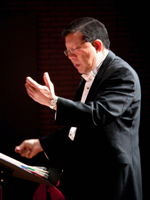 Mr. Lin has been invited to conduct before President George Bush, jointly performed with the Roger Wagner Chorale in a series of program for several years, conducted the California State University Chamber Choir, led the demo-singing group representing the U. S. West region in the Hawaii  Conference  organized by the American Choral Director Association.  In his direction, the Los Angeles Chinese Chorale accomplished the Taiwan concert tour and performed at the famed Taipei National Music Hall, received the silver medal in the Global Chinese Choral Competition held in Taiwan in 2002, and received the silver medal awarded by the International Folksong Choral Competition in Barcelona, Spain in September 2006.  In 2007, Mr. Lin was invited to lead the San Gabriel Valley Children’s Chorus to represent U. S. to attend the 11th Japan International Youth Musicale in Shizuoka, Japan.  In June 2010, he was invited to teach in the 20th World Chinese Church Music Assembly in Kuala Lumpur, Malaysia hosted by the World Association for Chinese Church Music (WACCM)

In the past 40 years, Mr. Lin has dedicated to arranging music, educating and conducting choral groups.  He has been conducting concerts in Asia, Europe, Israel, Dubai, and U.S.  He founded the LACA Music Foundation in 1994 and serves as the president of the board.  He is the Chair of the U.S. West region of the World Association for Chinese Church Music, music director and conductor of the East Valley Evangelical Formosan Church Choir, Los Angeles Chinese Chorale, Chinese Christian Chorale of Los Angeles, Southern California Senior Chorus, and San Gabriel Valley Children’s Chorus.

Mr. Lin has been invited as the guest professor by the Singapore Theological Seminary at Singapore and the Evangelical Alliance Mission Conference at Sydney, Australia.  He is frequently invited as the guest conductor by the local choruses in Los Angeles, San Francisco, Malaysia, etc… to interpret many master repertoires, and as the choral clinician and competition jury by both the children and adult choirs.