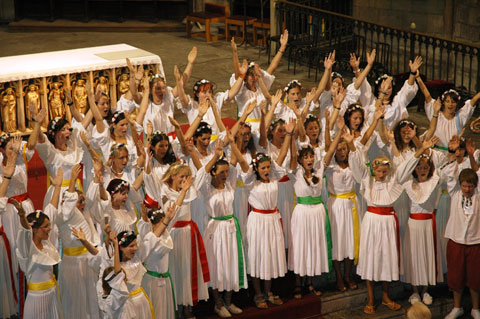 The choir was established in 1977 by Zdeňka Vrbová who has been its leader and conductor until the present day. Skřivánek comprises 118 children aged from 5 to 20. Children are divided into 2 groups - concert choir (58 members) and preparation choir (for younger children - about 60 members).

The Choir's repertoire is very varied. The Choir interprets compositions of nearly all styles and periods, music of both classical and world composers such as Mozart, Smetana, Verdi, Dvořák, Janáček, Martinů, Lukáš, Eben and others, folk songs, children chorus compositions, spirituals, and standards.

The choir works not only in our region. We are often invited to various festivals and competitions in the Czech Republic and abroad. Up to the present day, the children have sung in eight European countries. Our most notable success is winning 1st place at the International Choir Competition in Veldhoven, Holland (2001) and a bronze medal at the International Choir Festival "Orlando di Lasso", Vatican City (1998). The biggest success so far, is the Absolute Winner title from the international choir competition "Europe and its Songs" in Barcelona 2006. The choir was awarded the golden medal for the 1st place in young choir category and a cup for the absolute winner of the competition attended by 9 choirs from Europe and 1 from California.

In 2007/2008, we had the opportunity to sing in Los Angeles to celebrate our 30th anniversary. We presented works of Bedřich Smetana, Antonín Dvořák, Leoš Janáček, etc. The choir also presented the Moravian folklore performed in beautiful national costumes with special choreography.

In 2009, the Larks successfully represented the Czech choir mastery at the 11th Youth Music Festival in Shizuoka, Japan.

The conductor is Mrs. Zdeňka Vrbová who has been awarded the conductor's prize for her contribution to the Czech choir signing. The artistic leader and advisor of the choir is Pavel Koňárek. The pianists are Daniela Velebová and Tatiana Kekelyová.

Skřivánek Choir has recorded several CDs in co-operation with other musical bodies and also issues records of its concerts on compact discs. 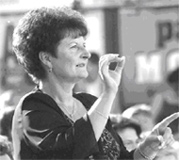 Zdeňka Vrbová, born in 1950 in Havlíčkův Brod, a graduate from the Teachers School in Boskovice and Music Education Department, and Faculty of the Masaryk University in Brno.
Zdeňka Vrbová founded the pre-school choir Skřivánek in Židlochovice in 1977. In 1981, the choir was transformed into two choirs, subsequently resulting in formation of preparatory and concert choirs. Under her leadership, the concert choir presented its excellence in many countries and has won remarkable international awards.
Zdeňka Vrbová has been awarded for pre-school children's musical education, for children's choir development, and for successful choral music representation in domestic and international competitions. 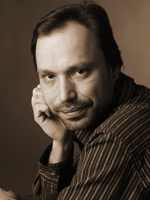 Pavel Koňárek is a graduate from Janáček Academy of Music and Performing Arts in Brno in the field of choir conducting and orchestra conducting. He works as a conductor of the Janáček Opera of the National Theatre in Brno, where he staged e.g. Donizetti´s L´elisir d´amore, the opera Andrèa Chenier by U. Giordano, Die Tote Stadt by E. W. Korngold, Verdi´s operas Un ballo in maschera, Simone Boccanegra, Rigoletto, Macbeth, Rossini´s Il barbiere di Siviglia, La Cenerentola, The Cunning Little Vixen by L. Janáček, Mozart´s Requiem, Don Giovanni, Figaro´s Wedding, and others. He took part in preparation of dozens of other performances and in 2004 and 2006 he took part in the tour of Japan with the Janáček Opera assembly.

Since 1995 he has been the artistic chief and conductor of the Žerotín Academic Choir. Under his leadership, the choir has given more than 150 concerts both at home and abroad, won the gold and silver medal at international choir competitions (1999 Olomouc, 2002 Preveza), issued its first profile CD disk and was invited to cooperate on recordings for SW Rundfung Baden - Baden, for Vienna Modern Masters as well as for the Czech Radio. Since 1999, Žerotín AC has worked under the Moravian Philharmonic Olomouc, in the subscription and extra concerts of which it regularly participates, performing vocal instrumental works (e.g. Mozart: Requiem, Salieri: Requiem, Rossini: Stabat Mater, Britten: St. Nicolas, Gershwin: Porgy and Bess, Orff: Carmina Burana, Dvořák: Te Deum, Stabat Mater, Stravinskij: Symphony of Psalms, Poulenc: Gloria, Beethoven: Missa in C ad.). Works of Czech authors of the 20th century such as B. Martinů, J. Novák, A. Tučapský or P. Eben form a significant part of the repertoire of Žerotín AC. Since 2004, the choir´s activity has expanded to co-performing in opera performances of the Moravian Theatre Olomouc.

In 1989 – 2005 he was a member and assistant of the conductor of the Brno Academic Choir and from 2001 to 2010 he was an external lecturer of the subject of Choir Management at the Department of Musicology of Palacký University in Olomouc.