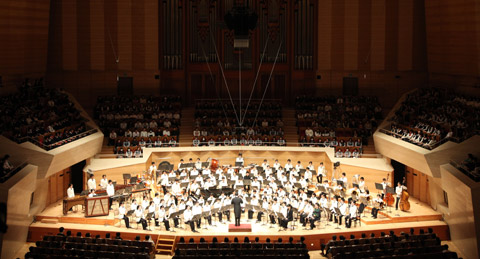 Saitama Sakae Wind Orchestra is one of the most prestigious high school bands in Japan.Not to mention the domestic activities in Japan, the band has won many awards overseas since its establishment.  They have so far held concerts in many countries such as USA, Austria, Belgium, and Taiwan.

At the Midwest Clinic held in Chicago, in 2006, out of 400 applying music groups all over the world, they were successfully chosen to participate in its Final Concert.  This was a remarkable achievement for a Japanese high school band to perform in the Final Concert for the first time in Japan’s history.  They received an enthusiastic standing ovation that never stopped for more than 10 minutes.

They also became the first Japanese high school band that performed at the Carnegie Hall in New York, USA.  The audience, who loved their performance, gave them a warm standing ovation three times. 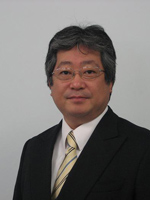 In 1962 he was born in Kamakura-city, Kanagawa prefecture, Japan. He started his career as an oboist at a brass band club in a junior high school. He kept his career throughout high school and university.

In 1985 he became a teacher at Saitama Sakae High School in Saitama Prefecture.

Along with Mr. Minoru Otaki, advisor and conductor of the Wind Orchestra Club, he was mainly in charge of its junior–band, consisting of students of the 1st and 2nd grade.

Since the first year he was with the band, it has won Gold or highest awards in all of the contests in which they participated up to the present. He conducted all the concerts overseas such as Vienna Youth Music Festival in 1985, a concert in Belgium in 1989, Taiwan Music Festival in 2009, and the U.S. Tour of 5 times from 2001 to 2008.

Of special note is that in 2008, he also led the concert held in the Carnegie Hall in New York City, U.S.A. He was commended in 2004 by the Mayor of Naperville, Illinois, and was appointed as an honorary citizen in the wake of his contribution to music, cultural exchange.