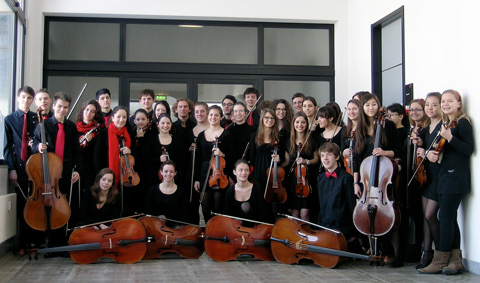 The Orchestra d ‘Archi giovanile della Svizzera italiana is the culmination of a large project  implemented within the School of Music (non-professional section) at the Conservatorio della Svizzera Italiana, involving more than 200 young students, organised in four string orchestras of different levels.
This orchestra is now composed of approximately 40 students, between 11 and 17 years of age.
Since its foundation it has given numerous concerts in Switzerland (Basel, Winterthur, Lugano, Bellinzona) and abroad (Chicago, Ann Arbor, Aberdeen, Rome, Bologna, Cremona, La Spezia, Trento, Verona, Trieste).

- As the only youth orchestra involved in this project, the Orchestra d’Archi Giovanile della Svizzera Italiana was invited to perform live, during the screening, the soundtrack of the short film "Peter and the Wolf", based on the famous score of S. Prokofiev. The first performance was  at the European premiere during the festival "Castellinaria" in Bellinzona on November 18th, and then at the Italian premiere in Rome, at the Sala Santa Cecilia on December 28th, 29th and 30th, 2006.

- It was invited to play in the European Congress of ESTA (European String Teachers Association) held in Cremona between April 26 and May 2, 2007.

- In July 2008 it was invited to perform for the 28th ISME World Conference which took place in Bologna at the Teatro Comunale. 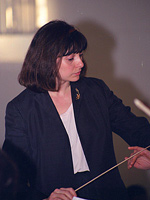 Anna Modesti has been the principal conductor of the Swiss Italian Youth String Orchestra since its foundation.
She has taught violin and violin pedagogy at the Conservatorio della Svizzera Italiana since 1990.
From 2003 to 2005 she was a member of the Committee of the Italian branch of the European String Teachers Association.
Since 2005 she is active in research in the field of instrumental teaching.

Anna has several publications to her credit and many of her students have distinguished themselves in various national and international competitions.