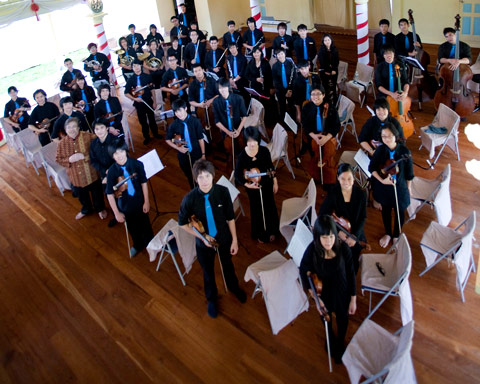 The Sinfonietta was founded in 2010 by Somtow Sucharitkul as a “back to basics” youth orchestra in which young people with a serious interest in becoming professional classical musicians could have the opportunity to perform “real music” — that is, the challenging works of the core repertoire.  Children may audition from as young as 12 and the orchestra has an upper age limit of 25.  Many of the older members have already participated in concerts with Thailand’s leading professional orchestras such as the Siam Philharmonic Orchestra and the Bangkok Symphony.

In the year since its founding, the Sinfonietta has performed an average of two concerts a month.  In its first year the orchestra concentrated exclusively on the classical period, and in its second year has branched out into the romantic and modern repertoire.

The Sinfonietta has performed a number of Thailand premieres, including Haydn’s Harmoniemesse and Mahler’s Blumine. They have also made a point of performing works by contemporary young Thai composers and this year have organized a competition whose winning work is to be featured in its first European tour.

The Siam Sinfonietta European concert tour is sponsored by 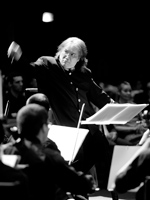 Once referred to by the International Herald Tribune as “the most well-known expatriate Thai in the world,” Somtow Sucharitkul returned to Thailand after five decades of wandering the world.  He is best known as an award-winning novelist and a composer of operas.

Born in Bangkok, Somtow grew up in Europe and was educated at Eton and Cambridge. His first career was in music and in the 1970s he acquired a reputation as a revolutionary composer, the first to combine Thai and Western instruments in radical new sonorities. Conditions in the arts in the region at the time proved so traumatic for the young composer that he suffered a major burnout, emigrated to the United States, and reinvented himself as a novelist using the non-de-plume S.P. Somtow

His 1984 novel Vampire Junction, was voted one of the forty all-time greatest horror books by the Horror Writers’ Association, joining established classics like Frankenstein and Dracula. His fifty-three books have sold about two million copies world-wide.

After becoming a Buddhist monk for a period in 2001, Somtow decided to refocus his attention on the country of his birth, founding Bangkok’s first international opera company and returning to music. According to London’s Opera magazine, “in just five years, Somtow has made Bangkok into the operatic hub of Southeast Asia.” His operas on Thai themes, Madana, Mae Naak, and Ayodhya, have been well received by international critics. His most recent opera, The Silent Prince, was premiered in 2010 in Houston.

He is increasingly in demand as a conductor specializing in opera. His repertoire runs the entire gamut from Monteverdi to Wagner. His work has been especially lauded for its stylistic authenticity and its lyricism. The orchestra he founded in Bangkok, the Siam Philharmonic, is mounting the first complete Mahler cycle in the region.

He is the first recipient of Thailand’s “Distinguished Silpathorn” award, given for an artist who has made and continues to make a major impact on the region’s culture, from Thailand’s Ministry of Culture.

“Discovered” by Somtow Sucharitkul at the age of 15 and engaged as resident repetiteur and assistant conductor of Opera Siam at 16, Trisdee had his operatic conducting debut in Opera Siam’s Die Zauberflöte at 20, immediately followed by Gluck’s Orfeo ed Euridice at the Steyr Music Festival in Austria.

Of Trisdee’s conducting of Die Zauberflöte, UK’s OPERA magazine said, “If the word ‘genius’ still has any meaning in this age of rampant hyperbole, Trisdee is truly a living example.”