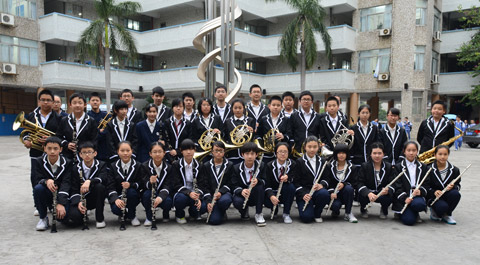 Zhuhai Zijing Middle School Wind Band was founded in February, 1995. It was the former Zhuhai No.1 High School wind band (Junior High School Department). Under the leadership and great support of our school, the band develops and expands greatly and obtained great achievements in a lot of competitions both at home and abroad. The band members keep taking training in their spare time to keep its high quality performance. Our band provide a wide platform for our little music lovers.

Our band pays great attention to the group cooperation ability. There are also strict behavioral norms in the daily management and training, which leads to the continuous development of our band.

All through the past years, our band has been actively opening to the outside world and increasing exchanges with other bands. We have been invited to communicate with other music groups and perform in Beijing, Macao, Hong Kong and Xi'an. We have also taken part in the exchange activities with Macao Houkong Middle School, Macao Scout Troops Band, orchestra, Joseph Secondary School, Macao Peizheng Middle School, Hongkong Jubilee Luoshi Girls Middle School, etc.

In addition, our band often participates in various large-scale performances and games held inside and outside the province and we won a lot of awards. The large-scale performances and games including the 1995 Zhuhai Commemoration of the World Anti-Fascist War and the War of Resistance against Japan, the 50 Anniversary “Historical Echo” Gala, the 15 Anniversary of Establishment of Zhuhai Special Zone Celebration and the 1996 Zhuhai First International Aviation Exposition. Apart from that, the band also won the first prize of the wind ensemble in the National Students Art Performance and the first prize of the wind ensemble in Guangdong province.

In 2010, the band was honored to be invited to participate in the “One Song” performance of the 16th Asian Sports Games Opening Ceremony, which greatly promoted the overall quality of our band. The performance also enriched students' experience in acting and motivated them to be harder working on daily training. 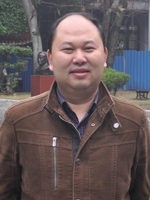 Mr. Liu Zhong, senior music teacher of Zhuhai Zijing Middle School, is also the member of China Conductors Association. He also acts as the general secretary of Zhuhai Wind Music Association. Mr. Liu Zhong graduated from orchestra department of Xi’an Music College and had ever served as the band conductor and training teacher of the Zhuhai No.1 High School Wind Band. He is now serving as the band conductor in Zhuhai Zijing Middle School. Mr. Liu Zhong has devoted himself to school band construction, during the ten-year conductor and instructor career, he has trained a large number of outstanding music talents and brought the band to different regions and countries to perform. Due to his great success in his career, he has won the National Outstanding Conductor Prize, Guangdong Excellent Teacher and Conductor Prize and several Zhuhai excellent band conduction prizes for many times.