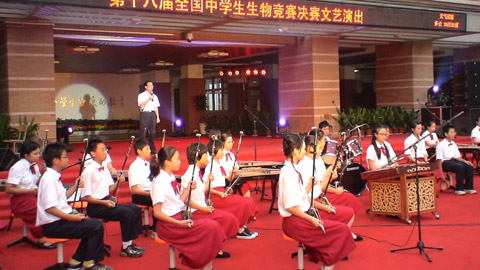 The orchestra of the Sub High School Affilated to Xi‘An Jiaotong University was founded in 2002. It is the first orchestra with national musical instruments in our school that aims at carrying forward our national culture and showing the charm of our national musical instruments. In recent years, we pay high attention to the development of the orchestra. Now it has a certain scale with more than 60 members who are students in our school. We hire performers and conductors of Shaanxi folk song as our instructors and honorary advisors. Our team, which aims at carrying forward elegant art, has been active on the stage for a long period of time and performed for the public good many times. The ceremonies we have participated include the award ceremony of the 18th National Biological Olympic Competition for middle school students, the award ceremony of the 28th National Physics Olympic Competition for middle school students, New Year's Concert of Xi'an Jiaotong University, etc. We have received favorable comments for our performances like Dance of the Golden Snake, Horse Racing, Travel Round the World, Blooming Flowers and Full Moon, Delivering Happy News from Beijing to the Frontier, etc. 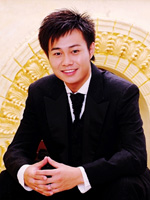 Pei graduated from Shaanxi Normal University, College of Music. Now he is the permanent conductor of the orchestra of the Sub High School Affilated to Xi‘An Jiaotong University . He has leaded his team out to take part in various kinds of performances and received favorable comments.