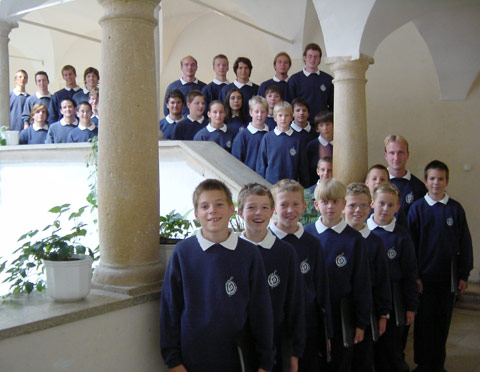 A three sentence description of the Grazer Keplerspatzen (The “Sparrows” choir of the Kepler Grammar School) might well run as follows. -  Above all it’s the music that counts. Next to this we place community. And only when these are right do we think of anything else. - The concept works and ensures that the members of the choir, all students or graduates of the Provincial Grammar school, invest a good deal of their spare time to be a part of it. In total, every member spends about four hours a week rehearsing, before or after school, as well as at weekends and holidays. To let one’s voice literally rise up gives a tremendous sense of something beyond oneself and is a source of contagious joy that is truly refreshing after all the other stresses of the “rough and tumble” youth.

The “Kepler Sparrows” were originally founded as an all-boys choir in 1967/68 by the then current Kepler Grammar school music master Fritz Haselwander. In 1993 music master and former “sparrow”, Ulrich Höhs, took over leadership of the choir and continued the work with a new energy. Meanwhile, girls' and men's voices were added to the choir, which have given rise to the characteristic sound that is typical of the “Kepler Sparrows”. Thus with a full ensemble, the choir is fully prepared to tackle almost anything in the range of modern and classical choral pieces. Whether for High Mass or Styrian Christmas Carols, everything is carefully rehearsed and performed to the highest level.

It is important to realise that the choir itself is in a continuous state of renewal. Each year, new sparrows are gently nurtured into the choral society, while veterans leave or take a sabbatical to allow their voice a rest. Since its inception, there have probably been well over a thousand children as members of the choir, over shorter or longer periods of time. For many, the memories of childhood are inextricably linked with the choir and its community. The community that lives and is constantly maintained, also constitutes the secret of success of the choir. Each summer, the entire choir runs a Choral Summer Camp for three weeks, which, of course, in addition to the daily rehearsals provides a lot of fun and games for the members. If you are not out trekking in the woods, or demonstrating your skills as a striker on the football field, then you might be sitting around the campfire with the rest of us, or settling down for the night in a hay loft, joking with others over gruesome horror stories. Long-standing members of the choir, students and professionals, facilitate the camp but also perform many other organisational tasks for the choir.

All this effort really amounts to something. The Grazer Keplerspatzen are well known beyond the city limits and make numerous appearances at home and abroad. They are able to get involved in opera, take part in special festive occasions, and record their own CD's or cut them live in performance. The choir is a wonderful way to connect professionalism, enjoyment, community cohesion and individual development with high musical standards and above all fun - all in the spirit of music. It’s the music that counts. 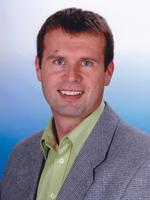 Born 1964 in Graz, Ulrich Höhs, was a student and a graduate member of the Kepler Grammar School in Graz and a Kepler sparrow. He studied Music Education and saxophone, and Anglo & American Studies in Graz. Höhs is a music master at the Kepler Grammar school and since 1993 has been artistic director of the choir, originally founded in 1967. He has introduced the majority of the current choral society repertoire to the choir, including Oratorios of Bach, Handel and Mendelssohn. He has performed and worked with the choir on projects with directors such as Nikolaus Harnoncourt, Philippe Jordan and received invitations to participate in festivals such as the Styriarte.

Next to the artistic work, the educational and social influence of the choir in the very closely knit community is especially important to him.