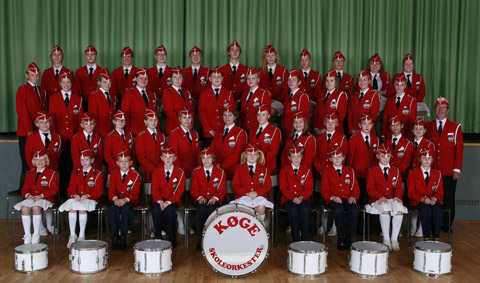 Køge Skoleorkester is one of the oldest youth bands in Denmark with roots from 1935 and from 1950 with a permanent organization with an executive committee elected between the children's parents. The musical training for the members in Køge Skoleorkester begins normally in the age of 8-9 years with playing fifes or drums. One and a half year later the education on an orchestra instrument takes place and one more year the members can start playing in the band.

On a yearly basis Køge Skoleorkester perform about 20 times for the public. In the months November and December we are performing 6 -7 times in costumes as pixie-like figures. Regularly we invites well known and highly beloved professional musicians and singers as guest soloist for one concert in the Christmas-time and one in the springtime.

Some of Køge Skoleorkesters international activities are regular to visit friendships bands in Norway (Kongsberg) and Germany (Burgsteinfurt) but we also have been touring in Finland Sweden, Holland, Belgium, Austria, Hungary and Czech Republic.

It is second time Køge Skoleorkester has the great pleasure to participate in an international music festival for young people in Vienna. 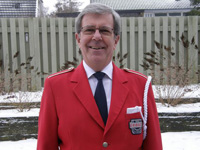 Arne Svendsen's musically career started in Køge School Band playing the tuba. With the background in the high level of training in the band in 1966 he was the winner of the competition for a professional job as tuba player in the Band of the Royal Danish Life Guards, and the 31st of March 2006 he retired from that position. All-round musically studies with top musicians in Denmark, England, France and Germany were completed with the degree of expert in teaching tuba in 1973 from the Royal Danish Academy of Music in Copenhagen and again in 1975 as the first Danish tuba player with the degree of soloist. In 1968 Arne Svendsen was one of the founder of the pioneer ensemble in the North – Copenhagen Brass Quintet. In the period 1968 – 1989 he played more than 300 concerts and arranged seminars with this brass quintet. In the North Arne Svendsen has taugth in euphonium and tuba playing on all NAMU-Sommer Music Schools during the years 1982-1990. As a teacher from 1975-2001 on the Academy of Music in Malmö, Sweden he also had a great influence on the high level of Scadinavian tuba playing and today musicians educated by Arne Svendsen have jobs among others in Hamburg, Kiel, Stockholm, Karlskrona, Oslo Copenhagen and many other towns in Denmark. With the experiences in chamber music, the work as 2nd conductor 1983-1995 in the Band of the Royal Dansik Life Guards and as 1st conductor in 1996 many concert bands and brass ensembles ask Arne Svendsen to be a guest teacher with them. Additionally he is also one of the leading profiles in making arrangements for brass ensembles and concert bands in Denmark. Arne Svendsen has been conductor in Køge School Band from 1971.