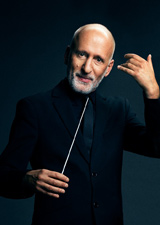 Born in Buenos Aires, Argentina in 1961 and living in Denmark, Saul Zaks is and international conductor and mediator who connects people from different cultures and provides a cross-cultural communication through music and the arts.

Saul Zaks is specialized in the music from Latin America and has performed and recorded with, amongst others, the composer Ariel Ramirez, the singer Mercedes Sosa, the composer & pianist Pablo Ziegler and the bandoneón players Daniel Binelli, Pablo Mainetti, César Stroscio and Rodolfo Marcelo Zanetti.

As Chorus Master, Saul Zaks has gained a nomination for the Danish Grammy Award 2006 - Best Classical Album - together with the Danish National Choir & Symphony Orchestra for recordings of "Choral Symphony & Requiem" by Asger Hamerik.

Additionally he has gained a nomination for the Latin Grammy Award 2016 in the category Best Tango Album - "Sax to Tango" - together with Pablo Ziegler, Julio Botti, Franco Pinna & The University of Southern Denmark Symphony Orchestra.

Together with Argentinean composer Martin Palmeri, Saul Zaks performed the Scandinavian premiere of "Misatango", and the World Premiere of the "Tango Credo" at Lincoln Center, New York in 2017.

Appointments in 2019 include the World Premiere of Martin Palmeri´s "Gran Misa" in Carnegie Hall, New York City, The International Music Festival in Bratislava and workshops and concerts at Hanover University of Music, Theatre and Media.