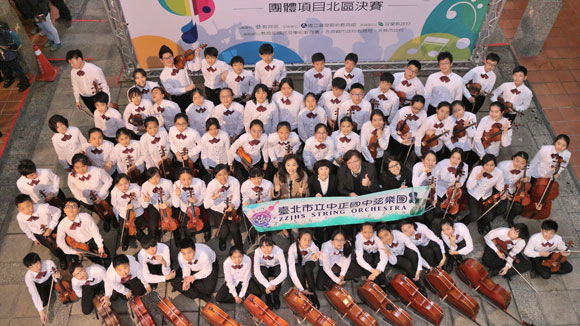 Zhong-Zheng Junior High School (ZZJHS) is one of the best junior high schools in Taipei, Taiwan. Our string orchestra, founded in 1999, is an auditioned group consists of approximately sixty students from the 7th and 8th grade who has 3-6 years of instrumental experiences. It also includes three chamber ensembles: string quartet, piano trio and piano quintet. Under the direction of Shang-Ching Lai, ZZJHS string orchestra has been recognized as one of the top junior orchestras in city-wide competition. Individual members and ensemble groups have also won solo and ensemble awards at local and national levels. With the dedication to strive for excellence at technical mastery as well as self-expression, the orchestra program consists of small group sessions taught by a group of talented musicians. It also gives students opportunities to perform with classical and modern repertoire in various venues. With the support from enthusiastic parents and the school community, the orchestra continues its mission to bring live classical music to students and teachers on campus, as well as the general public in and outside of school environment. Furthermore, they got the excellent 3rd prize of 2015 Summa Cum Laude International Youth Music Festival in Vienna, and have traveled abroad to several schools in Japan and Australia in the past for musical and cultural exchange programs including Canterbery College in Brisbane, Australia, in 2011. They also attended the Australia International Music Festival in Sydney to win the GOLD medal. Recently there was a music competition in Taipei in October, in which ZZJHS won the first place, once again proving its strong performance. In March 2018, won the first place in the national music competition. In November was invited to the national stage – the National Theatre. In March 2019, for two consecutive years, won the national student music competition string ensemble excellent 91.6 high scores! 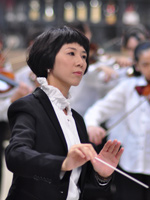 From the childhood, she started to accept orthodox music education. In 1994, she entered the Department of Music of the National Academy of Art (now Taipei National University of the Arts), and to set up a unique style of performance from the Professor Su Xianda. In 1999, she entered the Music Department of the Taipei National University of the Arts and performed her masterclasses with violinists Midori, Erick Friedman and Chang Wanjun to make the music field more international. During the 2001, she had outstanding achievements that admitted to the Taipei Symphony Orchestra, and the following year to obtain a master´s degree.