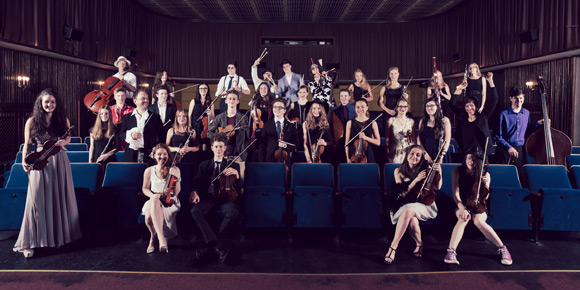 We are the youth symphony orchestra Tulln, a bunch of wild, talented, hard-to-control, but all the more energetic performing youngsters from Tulln and the satellite towns around (Heiligeneich, Vienna, Wolkersdorf ...). We play music from Baroque to the present day, commissioned compositions, the most beautiful and best works of the great masters, with and without vibrato, on modern or authentic instruments, in halls, churches and on tours - and always with full commitment.

How did that happen? It all started in 2014. That's not that long ago. But at that time the JSO began to open up on all sides: it became supraregional, relied on high quality of music, its interpretation, on intense rehearsals and a gradually deep-rooted social base. The JSO thus evolved from a music education offer to an orchestra »from us and for us«.

From this moment onward youthful ambition, megalomania and carelessness, as well as our great love of music and our friendship with each other, we were immediately taken to the Musikverein and the Staatsoper to perform there. Wow! Sure, everything was still small and wobbly, but apart from the fact that Tom Cruise was at the same time in the opera to shoot Mission Impossible and all our girls were thrilled, the gig was an initial spark: We are the JSO Tulln. The art is back. There's something going on. It was followed by an Italian tour, a concert tour to Gdansk, a tour of the Cote d'Azur, regular New Year's concerts, a handful of recordings, a broadcast about us on the radio Ö1, a trip to Iceland, where we were accompanied by a very great film team, that has made a documentary about us, and now just a trip to Krakow.

We have even commissioned composition assignments. Insanity, if you think so back ... We started at fifteen, now we are seventy musicians. We started with Valse triste by Sibelius, and now we wish for symphonies by Beethoven, Shostakovich or Bruckner from our conductor. And you know what? We'll get them too! :-) Stay in touch! 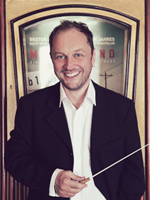 Originally I wanted to become a keyboard player in a rockband – the electronics, the buttons, the sounds and the live! What a perfect plan. However, my plan suffered a decisive damper, as the then music school director tested my musicality, whereupon he said that I was too musical for such a rocker career, I should learn French Horn. French horn? WTF? Lockjaw. But what do you want to do as a minor… So I began to play around on a patina-green, battered something from the local brass band's archive. What a defeat! Fortunately, the instrumentation soon received an update - and not only that! As soon as I mastered the instrument reasonably well, I became a member of the then legendary Youth Symphonic Orchestra Dornbirn. And that was better than any rock band! However, one thing soon became clear to me: it is much more interesting to conduct in front than to sit in the back, count bars and hope to catch the notes in the notes. I had to become a conductor. So off to Vienna.

That meant studying horn and conducting, as well as philosophy and theology. During this time I came to the next extremely influential orchestra: the Gustav Mahler Youth Orchestra. Teenagers from all over Europe, open minded, the most beautiful, biggest music in the world, parties in five-star hotels and me as a conductor: that was great tennis!

Even though I did pretty much everything I could get hold of - spa, amateur and professional orchestras - I knew what I did not want: routine, too little rehearsed stuff. Since I was not alone in this opinion, my friends and I founded the chamber orchestra "Feuerhaus" and began to do what "classics" usually never can do: we played with jazz musicians, composed our own works, gave concerts in discos, in Jazz clubs and at festivals. Unfortunately, we went bankrupt after a few years. Despite our latex clothes. We were too early with the extravagant concept. And dead losses in management matters.

How I received the offer to take over the JSO Tulln years later was clear to me what that must be: an orchestra of young people for young people! No secondary subject at a music school, but the goal of making music! An orchestra that becomes a tattoo for anyone who gets involved, a musical, social, intellectual and emotional center. I am working on it.