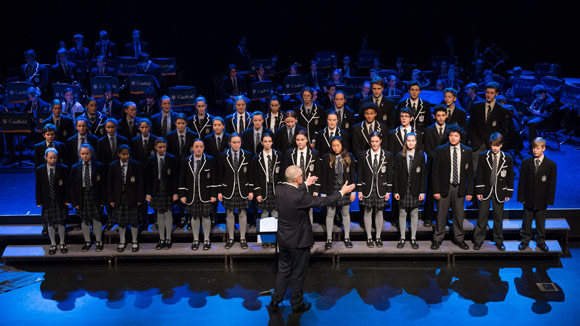 Since its foundation in 1881, Caulfield Grammar School has grown to become one of Australia's most renowned and influential coeducational day and boarding schools. Widely recognised and respected for its innovative learning programs, Caulfield Grammar School continued its strong tradition of innovation by being the first Australian School to establish an International Campus, for its own students. Supported by over sixty specialist teachers, the Music curriculum comprises of classroom music lessons from Kinder to Year 8. The classroom program is based on the philosophical principles of Kodaly – whereby all students have an instrument…. their voice! The co-curricular program is comprised of fifty ensembles, ranging from orchestras, bands and small ensembles - to auditioned chamber orchestras, stage bands and choirs. More than seven hundred individual private music lessons are taught each week and there are in excess of fifty informal and formal concerts, including the cross campus biennial School Concert held at Hamer Hall; and regular international tours. Music Scholarships also offer opportunities for all and enhance the music culture within the school. Over recent years, the choral program has developed in diversity and range across the Middle and Senior areas of secondary education at CGS. This program ranges from non-auditioned choirs designed to provide all students with the opportunity of becoming involved in singing, to auditioned chamber groups and vocal groups specialising in individual voices per part. There is also a high involvement in the School’s extensive musical theatre program, and there are well over one hundred singers studying contemporary and/or classical singing. The touring choir is comprised of singers from the auditioned choirs and vocal ensembles from Wheelers Hill and Caulfield campuses. As well the tour music we have prepared, we are excited by the opportunity to tell our story and present repertoire from a diverse range of Australian composers. We look forward to deepening our experience and skills, in harmony with the core vision, purpose and values of our School. Our touring Choir is directed by Ms Naomi Osborne and Mr William Simmons. 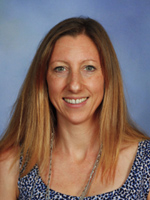 Naomi completed her Bachelor of Music Degree in 1998 at the University of Melbourne (double major in Voice and Violin) where she was awarded a scholarship (Voice) to complete her Honours year at the Royal Academy of Music (London). Whilst in England Naomi performed with English National Opera (La Boheme, The Girl in the West and The Barber of Seville) and upon her return to Australia performed with Opera Australia, Melbourne Opera, Melbourne Symphony Chorus and Frost /SEL (The White Cat – Title Role, Pirates of Penzance (Vocal Coach), Faure’s Requiem, Carmina Burana, and The Sound of Music). Throughout her career, Naomi has performed with Frost, Disney, The Production Company and worked as an assistant Vocal Coach on The Producers. She now works freelance as a Vocal coach. Whilst working as a Vocal Coach Naomi was given the opportunity to study Musical Directing which prompted her to commence a Masters of Music Degree at Melbourne University (completed in 2008). During her masters’ studies Naomi studied choral conducting with Mr Richard Gill OA, orchestral conducting with Mr John Hopkins OA OBE, and band conducting with Dr Rob McWilliams. Naomi completed an Education Degree at Monash University (2006) and has taught Voice and Violin at several academic institutions including Kilmore International School, Charles Sturt University, St Leonard’s College and Monash University where she is currently teaching voice. In 2011 Naomi commenced her employment at Caulfield Grammar School where she worked in the strings department for seven years before transferring to the vocal department where she now teaches Voice and directs various auditioned and non-auditioned vocal groups. 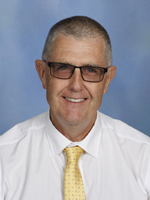 Bill commenced his studies in music in the early 1980s, completing a Bachelor of Arts at Monash University while working as a part-time primary music teacher at Brighton Grammar School, where he later become Head of Junior Music. He then studied his Bachelor of Music at the University of Melbourne, in Piano (honours), completing his degree in 1990. Bill studied Voice with Afro Poli, completing Australian examinations to 8th Grade, and conducting with Robert Rosen. In 1989, Bill moved to Melbourne Grammar School, where he was Director of Music at Wadhurst (Middle School) for nine years, before becoming Director of Music at Woodleigh School in Baxter. After a break from teaching, where he worked as State Director of Music (Queensland) and National Music Director for the Australian Youth Choir, Bill took up his present position at Caulfield Grammar School (Caulfield Campus) where he has worked for the past twelve years. At Caulfield, Bill has developed engagement in choral music, prepared for numerous concerts and events and competed regularly in competitions and festivals, winning the Open Choral section of the Royal South Street Eisteddfod twice, and placing in the top four of various sections of the national ‘Generations In Jazz’ in Mt Gambier three times. Throughout his career, Bill has been guest conductor/workshop presenter with many organisations, including Royal School of Church Music Summer School, the University of Queensland Kodaly Summer School, Musica Viva Schools Outreach Program, The Melbourne Symphony Orchestra Schools Programme and The Victorian State Schools Spectacular. Bill has trained choirs for international groups both in Australia and overseas, working with many groups such as the Philadelphia Boys’ Choir and Men’s Chorale, the English Chamber Singers, the Long Island Youth Orchestra, the Royal Ballet and the Vienna Boys’ Choir.