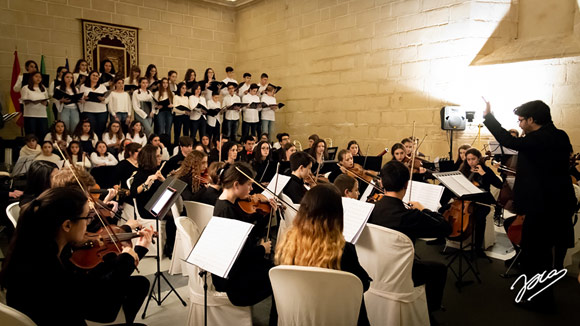 The Young Orchestra from Xerez (JOX) is an educational and pedagogical project started in 2016. This project provides young musicians a good quality education, that includes artistic and human values. Following these bases, we want our musicians to develop skills and abilities such as effort, empathy, learning wish, sensitivity, respect… These principles are useful as well for the music work as for life and human development. The JOX is formed by young musicians from 12 to 25 years old from Cádiz province in Spain. It consolidates as an educational and pedagogic project in Cádiz province, taking part in several concerts and musical meetings: Christmas Concert 2017 in Blas Infante Auditorium in Jerez; XII Days of Open Doors in Medina Sidonia; Book Fair in Claustros de Santo Domingo in Jerez; Musical Youth Festival in Chipiona. The orchestra has taken part in the perform of The Miserere composed by Hilarión Eslava, in collaboration with the Chorus of Villamarta Theatre in Jerez. Justo Manuel Jiménez Fábregas played as a guest conductor during the II Summer Meeting and the Christmas Concert 2018 was conducted by Studio ArteNow. Nowadays, the orchestra es formed by approximately 50 young musicians, who face a new stage from November 2018, summing up talent and enthusiasm with the help of a new Musical Director José Miguel Román. He comes along with his artistic team composed of Rebeca Barea Soriano, Coordinator and Viola Teacher, Lola Salas de Rueda, Wind Teacher, María de Goñi Lomas, Violoncello and Double Bass Teacher and Teresa Ramirez Ortegón, Violin Teacher. 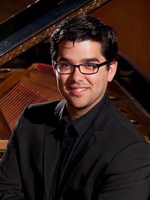 Born in 1993 in Jerez de la Frontera, he completed his piano studies at the "Manuel Castillo" Upper Conservatoire of Music in Sevilla under the tutelage of Arnold W. Collado and Tommaso Cogato, combining these with orchestral conducting classes with maestro Juan Luis Pérez and several courses with Enrique García Asensio and Lucía Marín. From 2007 to 2018 he was part of the Young Choir of Andalusia, offering concerts throughout the Andalusian geography and in Morocco with magnificent conductors such us Carlos Aransay, Lluis Vilamajó, Julio Dominguez, Michael Thomas, Michel Piquemal, Nayer Nagui and Laurent Couson between others. From 2008 to 2012 he was an active student of the Orchestral Studies Academy "Barenboim-Said", where he received piano lessons with Professor Alexander Vitlin (Professor of Repetition at the Hochschule für Musik Hanns Eisler in Berlin and assistant to Daniel Barenboim at the Staatsoper Berlin), and he accompanies the classes of the soloists of the Berlin Staatskapelle: Martin Reinhardt (trombone), Gregor Witt (oboe), Felix Schwartz (viola) and Holger Straube (bassoon). From 2010 to 2017 he is part of the Young Baroque Orchestra of Andalusia as a harpsichord, offering concerts through Andalusia, as well as several concerts in El Escorial auditorium with conductors such as Barry Sargent, Benjamin Chernier, Pilar Montoya and Michael Thomas. He receives harpsichord and organ classes from Alejandro Casal, Pilar Montoya and Ignasi Jordá. From 2013 to 2017, he works as a pianist accompanying the Villamarta de Jerez Theater Choir, working alongside with conductor Joan Cabero. Since the 2014 season, he has worked as a repeating Master of the Villamarta Theater. Musical director and founder of the Young Choir of the Villamarta Theater from 2016 to 2018. Musical director of the opera "El diluvió de Noé" by Benjamin Britten at the Villamarta Theater in April 2018. Musical and artistic director of "Gilgamesh", Daniel García Gallardo's opera premiered in July 2018 in the "Festival Delicatessen" of Jerez de la Frontera. President of the "ArteNow" Association since 2018. 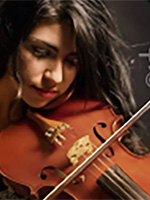 Rebeca Barea Soriano obtained the Title of Professional Teaching of Music in the specialty of viola in the C.P.M. Joaquín Villatoro (Jerez de la Frontera) under the tutelage of Professor Silvia Martín. She has studied Viola at C.S.M. Manuel Castillo (Sevilla), successfully completing the course at the "Universität Mozarteum Salzburg" (Austria), thanks to an ERASMUS SCHOLARSHIP, with Peter Langgartner as professor of viola, Leonhard Roczek lecturing chamber music and Hiro Kurosaki teaching baroque viola. Rebeca was a student of the "Barenboim-Said Orchestral Studies Academy" in the 2015/16 academic year with Jerome Ireland being her viola teacher. Since May 2011, she is a full member of the "Joven Coro de Andalucía", as a soprano, and was a full member of the "Andalusian Program for Young Instrumentalists (OJA)" from 2011 to 2015 as a violist, as well as a member of the "Joven Orquesta Barroca de Andalucía" as a viola from 2010 to 2017, a member of the "Joven Orquesta de Bicentenario (Cádiz)" from 2009 to 2013, a member of the "Orquesta Álvarez Beigbeder" of Jerez de la Frontera as a viola from 2011 and a member of the "Orquesta Joven de El Puerto de Santa María" since 2007. Since 2014 she is a soprano in the "Coro del Teatro Villamarta" (Jerez de la Frontera)and a member of the "Coro Joven del Teatro Villamarta" (Jerez) since its creation in 2016. Rebeca has accompanied singers like Jonathan Santiago, and toghether with the "Orquesta Snfónica Provincial de Málaga" Raphael on his "Raphael Synphónico" tour at the Fibes de Sevilla. She was selected by the "Academia Música Antigua" (Seville) in the academic year 2015/16 with her Baroque Quintet "Abdelazer", to make a study trip to Bologna (Italy). Currently she works as a teacher of Musical Initiation in the " Conservatorio Profesional de Música Joaquín Villatoro" and in the "El Centro Inglés" School, besides working as a viola teacher in the "Orquesta Joven de Xerez" and in the "Joven Camerata Jerezana", as well as performing in concerts with the different ensembles which she still belongs to.