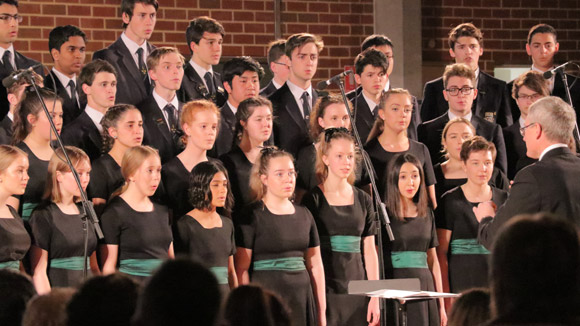 The Mercedes/Trinity Chorale is the combined choir of two catholic colleges from Perth, Western Australia. Both colleges have large choral programs in their own right. The combined choir places boys from the Trinity Senior Chorale with the Select Choir from Mercedes, allowing the performance of SATB choir repertoire. The choir currently has about 140 members but is touring with 73 students. In recent years the Mercedes/Trinity Chorale has performed in the Performing Arts Festival for Catholic Schools and Colleges, winning the Secondary Choir section in 2011, 2012 and 1014 and the sacred choral section in 2016 and 2017. In 2015 they premiered a commissioned work by Australian composer Dan Walker. Both college choirs have toured independently and with other choir liaisons. These include tours to the USA, China, Hong Kong, the United Kingdom, Ireland and the east coast of Australia. The choirs play an active role in the musical life of their colleges including performances at concerts and playing a significant part in the church services of their communities. 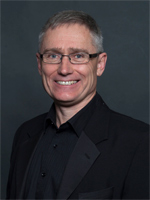 As Director of Music at Trinity College Robert conducts the senior school choirs who have sung in festivals in Sydney, Llangollen, Beijing, New York, Dublin, Belfast, London and Sydney. Robert works as an adjudicator, tutors choral conducting for ACCET at their annual Melbourne summer school and is active with the Australian National Choral Association. In 2017 Robert conducted the Vancouver Chamber Choir as part of their annual symposium, and the Giovanni Consort in a program of modern English repertoire. As the Musical Director of Voyces, Robert has focused on ‘contemporary classical’ choral music. In recent years Voyces produced an all Australian program for its debut self-titled CD; works from Iceland, Norway and Finland in its Tundra program and juxtaposing traditional choral pieces against modern counterparts they have inspired including Caroline Shaw’s To the Hands. Recent performances have included David John Lang’s Sorry I Missed You and Matthew Orlovich’s Sonnet to the Comet of 1825. Singing modern Australian works has brought Voyces a national reputation. They have toured to the 2014 Festival of Voices in Tasmania, the 2015 ANCA Choralfest in Melbourne and the 2017 ANCA Choralfest in Brisbane. Robert has done much to promote Australian choral music through commissioned works. His list of premièred commissioned works includes: Wheatbelt (Iain Grandage); Let Go of My Hand and Buckley’s (Paul Jarman); Vast Sea, Sleeping Mother, The Hooves of Fate and Ark of My Hopes, Ark of My Dreams (Dan Walker;) Canticle of the Word (Andrew Partington); The Wexford Carol (Arr.Stefan Pugliese). This year Perth based composer Perry Joyce has written Sanctus, Benedictus and Agnus Dei for the Trinity College Senior Chorale and The Frog Prince for choir and bass clarinet, premièred by Voyces with Ashley Smith as soloist. Robert has conducted an extensive range of major choral works with orchestra for the Perth Oratorio Choir. He has also prepared Ravel’s Daphnis and Chloe and Beethoven’s Symphony No. 9 for the WASO Chorus. Robert was the founding conductor of the WA Youth Chorale. In 2006 the WAYC won the state final of the ABC FM Sing Out competition and represented WA in the national final. 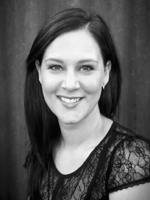 Claire Glendinning graduated with honours in Music Education from the University of Western Australia. She is currently a member of Voyces, a chamber choir based in Perth that performs contemporary choral music. Claire has also performed internationally with the Singapore Symphony Orchestra, nationally in the Festival of Voices in Tasmania, Choral Fest in Melbourne and Brisbane and locally in the Perth International Arts Festival. Claire has directed various choral and instrumental groups for the past nineteen years and is currently the Director of Music at Mercedes College, a Catholic girls’ school located in the centre of the Perth CBD in Western Australia. She is the director of several ensembles, including the Select Choir and Vocal Ensemble, as well as co-directing the combined Mercedes/Trinity Chorale. The Select Choir has performed in festivals in Hong Kong, Dublin, Belfast and London. The choirs enter festivals in Perth each year and have been awarded the Shield for the most outstanding performance in Liturgical Music for the past five years. The Mercedes/Trinity Chorale has also received this accolade many times for Secondary and Liturgical Choral singing. Claire has expanded the Music department at Mercedes College through her inclusive approach to music education, developing an exciting, new program that encourages participation of all students, no matter what their previous experience may be, as well as challenging senior students with diverse repertoire and performance opportunities.