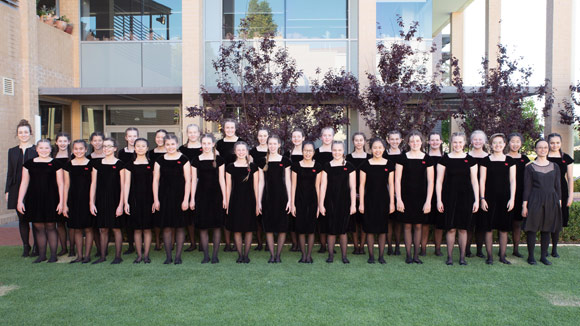 Penrhos College, Perth, Western Australia was founded in 1962. Located on a beautiful old pine plantation in the suburb of Como, the College has developed a reputation for its vibrant and diverse music program, currently under Director of Music, Jane Alderson. The Penrhos College Chorale consists of around eighty non-auditioned choristers between the ages of thirteen and eighteen. It rehearses once a week, and performs a wide variety of repertoire, both accompanied and a capella. The ensemble is represented by thirty of its members in Europe this year. The Penrhos College Music Department’s Artist in Residence Program was established in 2009, and students have the wonderful opportunity to work and perform with a different artist each year. Residencies have included internationally acclaimed artists such as The Idea of North, James Morrison, Cristian Grases, Andrew Eisenmann and Paul Jarman. In 2013, the Chorale toured to the United States of America, performing in Los Angeles, New York City and Washington D.C., where they were awarded a Gold plaque at the Washington D.C. International Music Festival. In 2016, Penrhos was thrilled to welcome Dr Grases to the College as Artist in Residence. He conducted a series of inspiring and educational workshops with the College’s six choirs, and a highlight of his visit was the opportunity for the students to work with him on his brand new choral work, ‘Not To Us’, commissioned by the College for the Chorale. Dr Grases’ residency culminated in a magnificent choral concert at the University of Western Australia’s Winthrop Hall, a performance which included the Australian premiere of his Carnegie Hall-commissioned work, ‘Gloria’. The Chorale toured to Europe in 2016, where they were awarded First Place with Outstanding Success in the Treble Choir category at the Tenth Summa Cum Laude International Youth Music Festival. The Penrhos College Chorale is conducted by Catherine Clarnette and accompanied by Gladys Chua. Thrilled to return to the Summa Cum Laude Festival in Vienna, the 2019 European tour will also see the choir perform in Salzburg, Prague, Ljubljana, Venice and Milan. 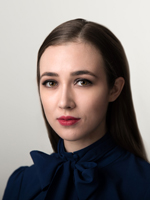 Catherine Clarnette holds a Bachelor of Arts in Music Education and a Bachelor of Arts in Jazz Music from Edith Cowan University (Perth, Western Australia). Graduating in 2012, she completed her principal performance studies in jazz voice at the Western Australian Academy of Performing Arts. Catherine is excited to return to the Summa Cum Laude Festival in Vienna, having participated as a student with the Methodist Ladies’ College Chorale and Symphony Orchestra in 2008, and as conductor of the Penrhos College Chorale in 2016. Catherine has a great love for working with young musicians, and has held the positions of Teacher of Music and Choir Director at Penrhos College since October 2012. Penrhos is known for its diverse choral program, where Catherine aims to provide opportunities for her students to excel across various choral contexts. Under Catherine’s direction, the non-auditioned Chorale achieved a Gold plaque at the Washington D.C. International Music Eisteddfod in 2013. In 2016, the Chorale placed First with Outstanding Success in the treble voices category at the Summa Cum Laude International Youth Music Festival in Vienna. Catherine has been fortunate to study under the wonderful tutelage of some of Australia’s best musical educators, and perform on international stages. As a vocalist and bandleader, performance highlights include shows at the Montreux Jazz Festival in Switzerland, Euro Disney in Paris and Fringe World Festival in Perth. As a composer, she regularly collaborates with Western Australian Youth Orchestras’ Collegium String Orchestra, and the ensemble has commissioned four works from her since 2010. Catherine is passionate about music education, as well as maintaining a regular performing and recording schedule. She has released three studio recordings, achieved her Australian Kodály Certificate in Secondary Music Education in 2018, and is currently pursuing a Master of Educational Leadership at the University of Western Australia. In addition to her position at Penrhos College, she has worked as a tutor with the Australian Girls Choir. 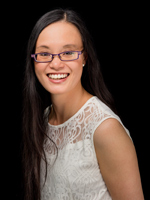 Pianist Gladys Chua studied music and economics at The University of Melbourne, then at The Opera Studio Melbourne as Repetiteur Intern in 2010. That year, she was appointed Director of Music at Queen’s College, The University of Melbourne. Subsequently, she studied with Timothy Young at the Australian National Academy of Music (ANAM) and undertook a Fellowship there in 2014. Gladys has performed in projects with the West Australian, Melbourne and Tasmanian Symphony Orchestras, and at the Australian Festival of Chamber Music, Perth International Arts Festival, Soft Soft Loud (PIAF), Blackwood River Chamber Festival, Port Fairy Spring Music Festival, and Synaesthesia at the Music of Old and New Art (Hobart). Gladys co-curated 'A Single Day' at the 2017 Fremantle Festival, has been a Freedman Fellowship nominee, and toured through eastern Australia for the ANAM Artist programme as a member of Ensemble Peregrine in 2018. As an educator, she has tutored at the Southern Cross Soloists Winter Music School, Tutti World Youth Music Festival Beijing. Gladys currently works at Penrhos College, accompanying choirs across Junior and Secondary Schools, working with various instrumental ensembles, and coaching students undertaking solo performances across all styles. She is also an Associate Lecturer in Chamber Music and vocal studies at The University of Western Australia.