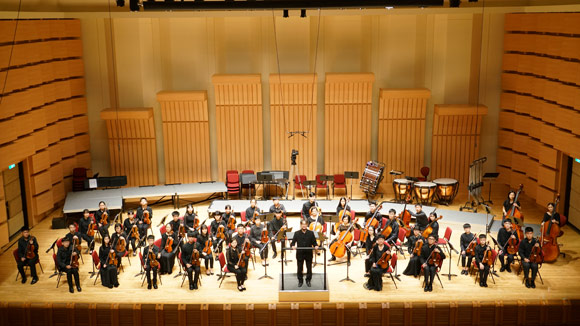 MoonString Symphony Orchestra  MoonString Symphony Orchestra was founded by violin virtuoso, Dr. Han-Ming Eric Huang, in his hometown of Taoyuan, Taiwan. The orchestra was previously known MoonString Youth String Orchestra since its inception in the year 2002. The principal violin players of the ensemble are Dr. Huang’s students, who won major violin competitions in the Republic of China.  The orchestra’s performance skills and magnificent music are highly-recognized and greatly appreciated by professional musicians and erudite audiences. In the past 16 years, MoonString has held over 70 concerts and performed at National Music Hall and major performing art centers in Taiwan. In 2006 and 2008, the orchestra toured and performed in Los Angels, USA and Okinawa, Sendai, Japan. Local newspapers and press in these municipalities provided warm receptions and positive press coverage. Currently, Dr. Han-Ming Eric Huang is shaping MoonString into a leading 21st -century, contemporary youth ensemble. He and composer Dr. Chihchun Chi-sun Lee, The Guggenheim Fellow and the second-time Harvard Fromm Foundation Commission grant winner, have the same goals, to bring contemporary elements and techniques, as well as incorporating a touch of fun attributes for the orchestra to bridge between young musicians and modern music. MoonString has been commissioned to Dr. Lee to compose “The Psalms of Formosa.” and play it at 2019 SCL String Orchestra Competition.  In this piece, the composer will utilize various traditional music from indigenous Formosan aboriginal tribes who have not yet received government recognition (such as the Oponoho tribe, the Kungadavane tribe, and the Teldreka tribe). In addition to Taiwanese traditional Hok-lo and Hakka folklore, MoonString is honored to display the variety of Taiwan music styles to the world. In the future, MoonString Symphony Orchestra will dedicate itself as a home to nurture modern young musicians, and create soul-touching music for fans and people everywhere. 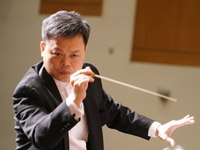 Master Degree of Violin Performance from New England Conservatory of Music . Has over 30 years of teaching experiences, during his stay in Canada, his students had participated in various competitions including Kiwanis and Canadian Music Competition (CMC) and won first place several times. After returning to Taiwan, he actively participated in music education and his students have outstanding performances, such as, admitting to Hochschule fuer Musik und Tanz Koeln, and Champion of High School Professional Team, NTD AP Music Competition. In 2017, he was invited to Beijing’ s Central Conservatory of Music Middle School as a visiting professor. His lively and in-depth teaching style has been positively recognized. Given that his passion for education is not limited to violin teaching, his ability for chamber music training and orchestra conducting have also been proved by achieving a remarkable score in many competitions. 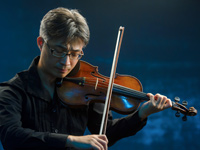 Dr. Han-Ming “Eric” Huang, Founder and Artistic Director of MoonString Symphony Orchestra. He received his master's degree in violin performance from Eastman School of Music and a doctorate degree from the University of Minnesota. Notable instructors include Hong-Ren Zhang, V. Tyspin, Ding-Ke Yan, S. Homer, Xu-Xian Zong, C. Tait, L. Blakeslee, and Young-Nam Kim. After obtaining his terminal degree, Dr. Huang studied with virtuosos such as V. Pikaizen and V. Paraschkevov.  In 2002, Dr. Huang led the Formosa Youth Symphony Orchestra in its Alice Tully Hall performance at Lincoln Center in New York City, and performed Violin Concerto No. 1 (Shostakovich) in the Clarice Smith Performing Arts Center at the University of Maryland. Here are some other notable accomplishments of Dr. Huang:  In 2004, performed Violin Concerto (Brahms) with the Classical Symphony Orchestra. In 2007, went on a concert tour to Italy and Germany as the concert master of Philharmonia Moments Musicaux. In 2008, led the Moonstring Symphony Orchestra to Los Angeles, USA; Senday, Japan; and Okinawa, Japan for exchange performances. In 2010, was invited by Zhongshan University Baroque Chamber Ensemble to be the substitute concert master and performed at the Shanghai World Expo. In 2011, accepted an invitation from violin master Nai-Yuan Hu to be second violin principal for the Taiwan Connection Ensemble. In 2014 and 2015, was invited to the cultural center in Henan, Zhengzhou, China to give a piano trio recital. In 2016, performed Violin Concerto (Sibelius) with the Moonstring Symphony Orchestra. In 2018, was invited by a guzheng artist to perform The Lark Ascending (Vaughan Williams). In December of the same year, Dr. Huang gave a recital for his twentieth anniversary of returning to his homeland, performing Tzigane (Ravel) with the Moonstring Symphony Orchestra. In 2019, was invited to perform The Butterfly Lovers Violin Concerto (violin with guzheng edition) with the Taipei Civic Symphony Orchestra with conductor/composer Zhan-Hao He.