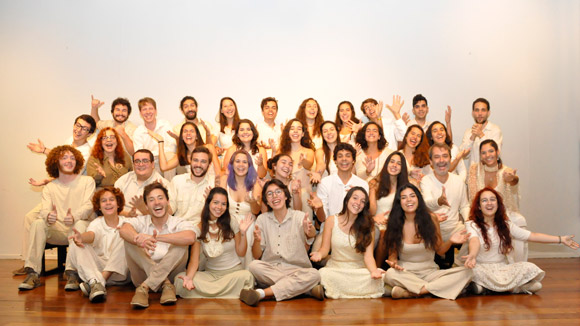 The São Vicente a Cappella Youth Choir was founded in 1999, by Dr. Patricia Costa, gathering students and ex-students of Colégio São Vicente de Paulo (regular school), in Rio de Janeiro, Brazil. With age range between 11 and 23 years old, the choir develops a cappella repertoire, exploring national and international high-level music, from different periods and styles. It also seeks to promote Brazilian music, whether traditional or popular. The Expressive Youthful Ensemble Singing (EYES) technique, coached by Dr. Costa, enhances the group interpretation, inspiring movement, lyricism and joy. São Vicente a Cappella has been invited to important choral events in Brazil, becoming a national reference in youth choir singing. In 2013 the group represented Brazil youth choir at the Cantapueblo Festival, in Mendoza (Argentina), being acclaimed in all concerts. The choir also took part, as a guest artist, in the last edition of The Voice Brazil 2014, achieving great success, proven by the 83 million views on its broadcast link. Preparing to tour in Europe in July 2019, still without sponsors, the choir has been promoting social media campaigns for fundraising. Patricia Costa is responsible for directing and conducting the choir. Danilo Frederico is the accompanist pianist and vocal coach, as well as assistant conductor. The group also counts on Vicente Nucci (B.Mus.), as assistant, and arranger. 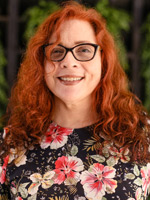 Music teacher, choir director, vocal arranger and scene director for performing music, Dr. Patricia Costa is dedicated to choral singing since 1978 and, since 1993, as youth choir director. Dr. Costa has created a successful choir program at Colégio São Vicente de Paulo (regular school) for children and teenagers, expanded to adults’ choirs. At their 25th anniversary this year, there are today seven different choirs. She has also worked in two singular music projects for teenagers at risk and of disadvantaged communities in Rio de Janeiro. Dr. Costa has also directed adults’ community choirs until 2015. Dr. Costa has developed a different approach to choir music, EYES (Expressive Youthful Ensemble Singing) since 1992, combining Music, Theater and Body Movement. Dr. Costa holds a Bachelor’s Degree in Music Education (BME), a Master’s Degree in Music Education (MME) and a Doctorate Degree in Performance (PhD), all of them from the Federal University of the State of Rio de Janeiro (UNIRIO). Dr. Costa was a FULBRIGHT visiting researcher at Butler University, between 2015/2016. She has attended different courses, workshops and lectures of reputed international professionals as Eph Elly, Andre Thomas, Henry Leck, Mary Goetze, Rodney Echenberger, Juan Tony Gusman, Robert Sünd, Bob Chilcott, Gunta Malëvica, Alberto Grau, John Washburn and Marjukka Riihimaki. She has attended workshops with Eric Whitacre and John Rutter in Riga (Latvia) as part of the European Gran Prix 2017. She has attended ACDA conventions since 2015, and also IMEA and ISSMA events. Her experience in singing expression together with her academic background in Music makes her one of the most requested choir directors in Brazil in the field of school choir and body movement. Dr. Costa has been invited to publish articles in well reputed journals in Brazil (Per Musi, ABEM and OCC), as well as in the International Choral Bulletin; she has published an article by Creative Education (Scientific Research), in a special issue on Aesthetic Education, 2014, counting more than 6,000 downloads and 7,000 views, according to the publishers. 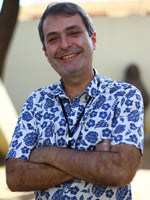 Choir director, singer, and pianist, graduated by the Academy of Music Elzira Amabile, Danilo Frederico has been working with children and adults' music classes, since 1992. He conducts Vozes Cariocas (adults' choir from Rio de Janeiro), as well as the Colégio São Vicente de Paulo adults' choirs. He is also São Vicente a Cappella vocal coach. He was a substitute conductor for the UNISUAM choir in 2005. As a pianist (accompaniment), he works with the Colégio São Vicente de Paulo and Colégio Cruzeiro youth choirs, as well as with violin classes. Mr. Frederico has given workshops at the House of Culture of Angra dos Reis and Ernesto Nazareth Music Academy. He is the vocal coach of several theatre groups, among them Fuzarca da Lira and the vocal group 4 Cantus, in which he also acts as a singer. He has participated as an actor and musician in the musical Francisco de Assis and in the opera Viva la Mamma. He has also joined the Pro Arte Chamber Choir between 1996 and 2005. He is currently specialising in choral conducting with Prof. Dr. Carlos Alberto Figueiredo, in the Pro Arte Music Seminars. He has joined the team of the Catanduva Choir Festival (FESCC), as a pianist and vocal coach.