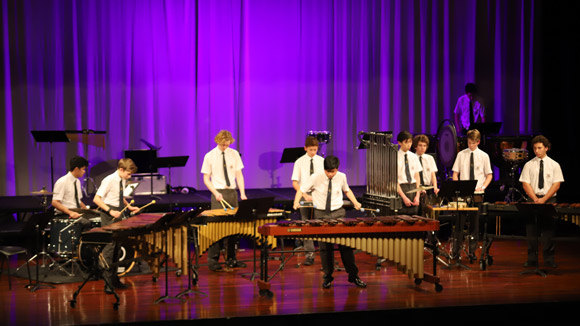 Trinity College is home to one of the most vibrant secondary percussion departments in Perth, Western Australia. The Trinity College Percussion Ensemble is the most advanced of four percussion groups currently running at the school. They undertake an intense performance calendar each year and perform a diverse range of challenging repertoire including Classical arrangements, large drumming works, mixed ensemble pieces and novelty theatrical items. The ensemble are frequent finalists in the Catholic Schools’ Performing Arts Festival and were invited to perform at Perth Concert Hall, the state’s premier performing arts venue, as part of the 2018 showcase. Individual members of the ensemble are also consistently represented in the solo and duet prizes of this festival. Trinity College Percussion Ensemble is recognised as one of the best secondary school percussion ensembles in Perth and have been guest artists at the University of Western Australia’s percussion festivals, playing alongside tertiary and professional musicians. For decades now, many of the ensemble’s members have been offered places at the prestigious West Australian Academy of Performing Arts to continue their percussion studies beyond high school and have also been a part of the renowned Australian Youth Orchestra programs. These players have gone on to have successful performing and teaching careers around Australia. 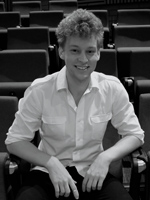 Joel Bass is an orchestral percussionist, pianist and conductor based in Perth, Western Australia. He studied a double degree in music and acoustical engineering at the University of Western Australia where he was the top music graduate of his year. During this time he played as principal percussionist and timpanist with the Australian Youth Orchestra, and was a part of their 2013 European Tour, and was also a concerto prize winner with the West Australian Youth Orchestra. He continued his studies at the Universität der Künst Berlin before returning to Australia to develop an active and varied freelance career. He has played frequently with the West Australian Symphony Orchestra, including in an acting principal role He has also worked with many of Australia’s other professional orchestras, including the Adelaide Symphony Orchestra, Melbourne Symphony Orchestra, Orchestra Victoria and the Tasmanian Symphony Orchestra, the latter of which he toured to China with in 2017. He has also been principal percussionist of the Momentum Ensemble since 2015, which unites professional musicians from around Australia to perform four innovative early and contemporary music concerts per year. He is highly sought after as a percussion teacher and works with the percussionists at many of Perth’s most elite secondary music schools. He is also an accomplished pianist, keeping a very busy accompaniment schedule, working on various musical theatre productions, and performing at Steinway sponsored events. As a conductor, he has graduated from the renowned Symphony Australia Conducting Program, which works with all of Australia’s professional orchestras, and directs many youth and professional ensemble projects around Perth.