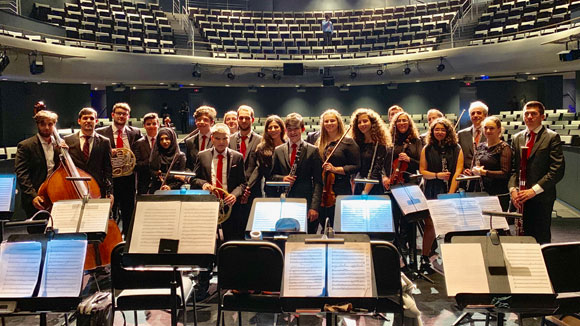 The Filasteen Young Musicians Orchestra is the flagship of Barenboim-Said Foundation Ramallah. The orchestra was founded 2015, and it consists of the young students of Barenboim-Said Foundation and other Palestinian musicians from the area. The orchestra is based in Ramallah Palestine, and it performs regularly at the Medical Relief Society and other venues.

The Barenboim-Said Foundation was established in 2003 by late Palestinian intellectual and scholar, Edward Said, and the renowned pianist and conductor, Daniel Barenboim. The founders believed that music enhances human life and, through the creation of the Foundation, they aimed to make classical music education accessible to Palestinian children and young adults. Through its activities at the Music Center in Ramallah, the Foundation focuses on Palestinian children and young adults regardless of their social or economic background and offers the highest level of education. 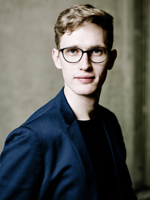 In March 2018, Thomas Guggeis caused an international sensation when he substituted short-term for Christoph von Dohnányi in the highly acclaimed new production of Salome at the Berlin State Opera. Since the season 2018/19 he is engaged as director of music at the State Opera Stuttgart, where he will conduct productions such as La Bohème, Il barbiere di Siviglia and Madama Butterfly. Previously, he worked as assistant to Daniel Barenboim at the opera Unter den Linden, accompanying the General Music Director in his productions and assisting other well-known conductors such as Zubin Mehta, Simone Young and Antonio Pappano. This season performances of Der Freischütz, Hänsel and Gretel and The Magic Flute at the Staatsoper Berlin will follow. He will also conduct a new production of Oberon at the Theater an der Wien. In 2016 Thomas Guggeis worked as an assistant to Franz Welser-Möst for the new production of R. Strauss’ Die Liebe der Danae at the Salzburg Festival and assisted Cornelius Meister with his recording of Dvorak's Svatebni Košile with the RSO Vienna. He returned to the Salzburg Festival in 2017 to rehearse Aribert Reimann's Lear with Franz Welser-Möst. He conducted opera performances at the Badisches Staatstheater Karlsruhe and the Kammeroper Munich, where he was long associated as director of music and assistant to the Chief Conductor. In early 2018 he was responsible for the musical direction of a new production of Pelléas et Mélisande at the Kammeroper of the Theater an der Wien. In the symphonic field he has worked with orchestras such as the Munich Symphony Orchestra, the Orchestra Sinfonica di Milano Giuseppe Verdi, the Bad Reichenhall Philharmonic, the Munich Chamber Orchestra and the Georgian Chamber Orchestra. His intensive engagement with New Music is reflected in his collaboration with the Boulez Ensemble, the Munich Ensemble Oktopus and the Ensemble opus21plus. Thomas Guggeis studied conducting in Munich and Milan with Bruno Weil, Marcus Bosch and Vittorio Parisi and completed his training through master classes with Gianandrea Noseda, Vladimir Jurowski and Alexander Liebreich.