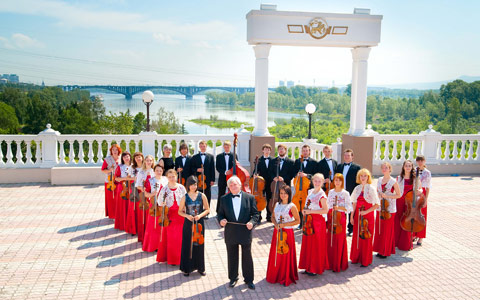 The basis of the Krasnoyarsk Chamber Orchestra, established in May 1993 by the Krasnoyarsk City Administration, makes the best graduates of the Department of string instruments of the Krasnoyarsk Academy of Music and Theatre. Most of them are the students of Mikhael Benyumov. That is why the orchestra has the unity of school and its own creative style.

The Krasnoyarsk Chamber Orchestra is the initiator, organizer and participant of such large-scale local, regional and international projects and festivals as "Lessons of Live Music", "Music at Museum", "Masterpieces of chamber-orchestral music in the Siberian province," "Young Virtuosos of Krasnoyarsk "," Siberia – Europe".
The orchestra successfully is on tours in Russia, Italy, Germany, Spain, France, Poland.

The creativeness of the orchestra and the aspiration to perform both the classics and the contemporary music attract for co-work well-known composers who dedicate their works to the orchestra and who trust it the performance of the world premieres. The orchestra has performed the world premieres of contemporary composers Azio Corgi, Jorge Bosso, Ivano Battiston, Alexei Starodubrovsky, Michael Arkadiev, Vladimir Ponomarev. Some of them were broadcast by the European channel "SKY CLASSICA", the channel "Culture".

In 2006, in Italy there was released a disc of the Krasnoyarsk Chamber Orchestra with soloists F. Faes and A. Serova. The disc got the highest grade of the specialized European edition "Audio File". There were recorded the world premieres of the specially composed for the Winter Arts Surikov Festival the orchestral piece "Morning of Strelets' execution" by I. Fleischer, the oratorio work by H. Bosso "I am Surikov, a Russian Cossack", Triple Concerto "In Search of Lost Tango" by J. Bosso for Accordion , Violin, Cello and Orchestra. In addition, in 2010 with the support of H. Sovmen there was released a double CD "Cremona – Krasnoyarsk. Symphony of Two Cities " with the recordings of world premier performances of the cantatas by A. Corgi "Endless sorrow "(conductor F. Faes, soloist A. Serova) and Concerto for Violin and Orchestra by O. Prostitov (conductor A. Kosinski, soloist M. Benyumov). 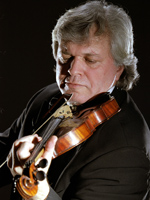 He started his learning to play the violin in Kiev was taught by G. E. Yampolsky. At the age of 14 he moved to Moscow, where he continued his education at M. A. Garlitsky, M. S. Block, M. I. Fikhtengolts and R.D. Dubinsky.
M. I. Benyumov is the founder and permanent head of the municipality creative collective - the Krasnoyarsk chamber orchestra, the establishment of which in May 1993 became the result of merging of directions of the creative activity of the musician: artistic and pedagogical. Most of the violinists of the orchestra are his direct students, what ensures the unity of the school and performing style.

The orchestra tours in the region, in Russia and abroad. Since 1994 there has been given a huge number of concerts both in Moscow and in many cities of Spain, Italy, Poland, France and Germany.
Over the years the artistic director and conductor has also performed as a soloist of the orchestra. He has performed all the violin concertos by J. S. Bach, concertos by A. Vivaldi, including the series "The Seasons", concertos for violin and orchestra by Haydn, Mozart, his "Concert symphony for Violin and Viola" and many others.

There is a number of works written specifically for him by contemporary composers. They are "Concerto for String Orchestra, Flute and Accordion" by I. Battiston (Italy), his "Triptych for the Strings", as well as presented in this edition, "Concerto for Violin and Orchestra" by A. Prostitov. Among the works, first performed under his conducting, there is "the Third Symphony" by V. Porotsky, "Concerto Grosso" by M. Arkadiev (Moscow), “Concerto Grosso", "Concerto for String Orchestra "Russian choirs" and the cantata "Ways of the Lord" by V. Ponomarev, "Concerto for Violin, Cello, Accordion, Strings and Percussion "Searching the Lost Tango" by J. Bosso (Argentina) and works by I. Fleischer, A. Starodubrovstky, F. Veselkov. M. Benyumov is the artistic director of a number of important festivals, the most important of which is the international festival of chamber-orchestral music "Siberia-Europe", which has been held annually in Krasnoyarsk since 2001.