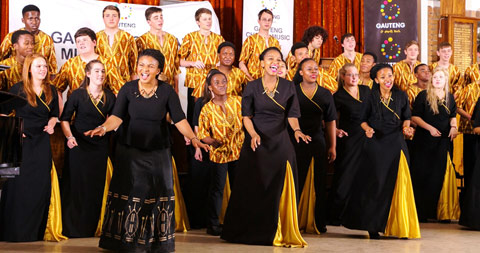 Music and singing has always been a crucial part of our African heritage and the UP Youth Choir represents the positive impact participating in this enriching environment can have on the youth. The UP Youth choir is a regional multicultural mixed youth choir consisting of 85 members that are sourced from 32 schools and tertiary institutions across Gauteng, South Africa. This vibrant youth choir consists of teenagers between the ages of 14 – 20 years old.

• 2004 was our 1st appearance at the World Choir Games were we received a gold medal & overall 2nd place in the Mixed Youth Choirs division & a silver medal & 5th overall in the Folk-lore a Capella division at the 3rd Choir Olympics in Bremen Germany.
• In May 2006 we obtained two gold medals at the inaugural Cantatuks National Youth Choir Eisteddfod and again in May 2007.
• In 2007, the UP Youth Choir performed for the Jamaican Embassy at their Independence Day celebrations, held in Soweto.
• In 2008 the choir toured to Namibia, where they performed with different youth & university choirs from Windhoek, Keetmans-hoop, Swakopmund & Walvisbay.
• In 2009 UPYC participated in the “Music in the Mountains” festival in the Drakensberg Region, performing with the Drakensberg Boys Choir.
• In June 2010, UP Youth Choir took part in the 13th Annual Alta Pusteria Festival in Pusteria, Italy & performed to highest acclaim in Austria & Germany. They performed at the 2010 National Launch of the Tshwane HCT Campaign, which was hosted by the Tshwane Mayoral AIDS Council.
• In 2011, the choir completed a Concert Tour to Cape Town and Stellenbosch. They also performed at the gala evening of the Tshwane Youth Arts Festival held in the Pretoria State Theatre.
• April 2012 showcased the choir as the only choir from South Africa to be invited to participate in the European Music Festival for Young People in Neerpelt, Belgium where they won the 1st prize in the Youth Choirs category. The UP Youth Choir organised the only concert in Pretoria of the international group “The Real Group”. The highlight of the 2012 year was the African Premiere of the Sunrise Mass by Ola Gjeilo during their gala concert.
• 2013 was a wonderful year used to create the necessary performance capacity to prepare a foundation for our participation on the international stage in 2014. We hosted the Real group, performed at conference openings, at embassies, the Swiss National day, hosted our first Choir Conductors Workshop in Nov, was involved with the national ZAZI – know your strength- campaign perfoming with Zonke and King Nova, hosted awareness events at our choir festivals, performed with the Kokkopelli choir from Canada, signed a special corporation agreement with Ndlovu Youth Choir and celebrated their wonderful HIV/Aids project through an outreach day in Moutse. The choir toured to Namibia, as part of our social outreach programme. They hosted a big international Big Band production in Nov 2013 with an 18 piece big band, various alumni performers and Ian von Memerty as the MC. A special highlight of the year was when UPYC won the Gauteng Chorale Competition at the finale against 11 choirs with a score of 91.67%. This was the golden seal on a wonderful choir year. 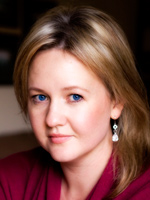 Lhente-Mari Pitout , a South African Choral Conductor is a passionate musician and music educator in the rich traditions of the South African choral field. She works as a musician, conductor and adjudicator in both classical and contemporary genres. She regularly travels to Europe and North America to work as choral clinician or adjudicator at National and International Festivals.

Lhente-Mari finished her studies in Potchefstroom, North West University where she obtained her B.Mus (Performance) in Piano and Voice. She obtained both her Grade 8 certificates for singing and piano from UNISA ( University of South Africa). She furthered her studies in Choral Conducting specializing in a Masters in Choral Conducting. She has been awarded numerous prizes for her contributions to the arts and as a singer and conductor.

She was a member and later director of the A Cappella group, Boulevard Harmonists. They toured extensively and participated in all the major South African Music and Arts Festivals as well as representing South Africa in international festivals touring through Europe. In 2001 she was selected by the IFCM (International Federation of Choral Music) as part of a vocal jazz ensemble. Gold Company director Steve Zegree, conducted this 16 voice jazz ensemble that toured and gave concerts in Belgium, France and South Africa. In 2002 she was selected as a member of World Voices, an elite ensemble consisting of old World Youth Choir members which gathers once a year for international festivals and projects. In 2003 she was one of five musicians recruited for the International S.O.U.L (Singers of United Lands) Project. In 2004 she was chosen as a member of the UNESCO Ambassador of Goodwill World Chamber Choir, a project choir comprising of singers from around the world who are invited to perform with famous conductors, soloists and orchestras.

In 2007 she established the Lesedi Show Choir Project in Heidelberg, Gauteng. This initiative is a project to help amateur artists realize their talents and dreams. The project forms part of HAMACC, Heidelberg Arts Media and Culture Centre model in Gauteng. In 2008 she was invited to Sweden for the 20th Anniversary of the World Youth Choir, performing in the chamber choir project representing South Africa and chosen to serve on the Alumni board. In 2010 she was invited to the World Youth Choir session in Tenerife/Spain working and conducting the choir as section leader.

Lhente-Mari was appointed as the conductor and musical director of the University of Pretoria Youth Choir since 2005. This prestigious choir represents 85 highly talented singers recruited from more than 30 schools in the Greater Pretoria Tshwane region. They have travelled extensively locally and internationally, and received numerous awards and prizes. They truly are a representation of South African music tradition and is acclaimed as one of the greatest ambassadors of choral music in the country. She is also the conductor of the highly prestigious and awarded Pretoria Boys High School Choir and the St. Albans College Choir and Barbershop.

Lhente-Mari is very passionate about the development of the Arts in South Africa, teaching students, singers and artists the expression and realization of dreams and ideas through the performing arts. She is married to Reynhardt Pitout and lives in Pretoria.