The Westlake Concert Band is a co-operating ensemble between Westlake Boys and Westlake Girls High School on the North Shore of Auckland in New Zealand. The two schools are just a kilometre apart and the record is 3 and a half minutes from the boys school to the girls school -longer when carrying a Tuba! The band has 59 players on wind, brass and percussion and performs a wide variety of music. The group has to be keen and committed as their weekly rehearsal is at 7:30 in the morning. The Band attends a notorious annual camp and well as receiving workshops from a number of prominent Auckland musicians. Over the years the Westlake Concert Band has achieved long list of Awards and Honours at various National and International Music Festivals. Each year the Band performs a wide variety of repertoire and has also commissioned several original works from New Zealand composers. 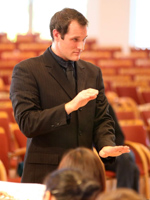 The Musical Director of the Westlake Concert Band is Warwick Robinson, Head of Music at Westlake Boys High School. Warwick has a master's degree in Clarinet performance from the University of Auckland and now divides his time between classroom teaching and conducting and arts administration. Warwick is also the co­ ordinator of the KBB Music Festival, New Zealand's largest Band and Orchestra competition.