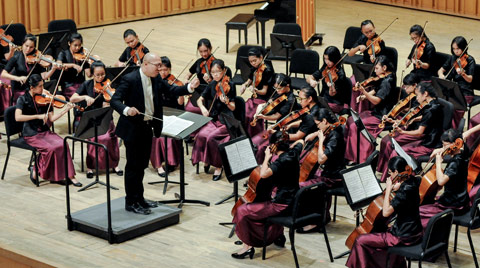 The Methodist Girls’ School (MGS) String Ensemble is made up of a group of dedicated and passionate young ladies, aged 13-16, who share a strong love for music. The ensemble not only enjoys listening to music and learning, but also delights in sharing their music with others. Under the baton of Mr Oh Han Ling, himself a distinguished violist and conductor, the ensemble has participated in numerous public performances and master-classes. These master-classes involve distinguished musicians such as Professor David Strange, Professor Emeritus of Strings from the Royal Academy of Music (UK) and Dr Ya-Hui Wang, who was a music director at the Yong Siew Toh Conservatory of Music (Singapore), Evergreen Symphony Orchestra (Taiwan) and Akron Symphony Orchestra (Ohio, USA).

The ensemble has also proven to be one of the best in Singapore for their age group, consistently achieving the highest possible grading assessment in the biennale Singapore Youth Festival (SYF) since 2003. In the most recent SYF, the ensemble was again awarded the Certificate of Distinction for its ‘high level of musicianship and technical brilliance’. 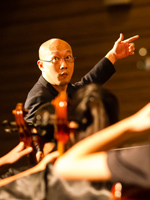 Hailed as one of Singapore’s most versatile musicians, Han has attained top accolades from performing with acclaimed international artists from most musical genres. He was invited to perform alongside a wide spectrum of top artists ranging from the classical T’ang Quartet to iconic pop - rock legends such as Jay - Z, Linkin Park, David Foster and Paul McCartney amongst many others.

Upon his return to Singapore in 2007, Han has been actively involved in the local performing arts scene, contributing his expertise to numerous musical arts groups of different genres.

Classically, Han served as principal violist for numerous orchestras including the Colorado Mahler Festival Orchestra, Asian American Philharmonic Orchestra, the San Francisco Lyric Opera Orchestra, Singapore Lyric Opera Orchestra and has led its viola section for numerous productions. He was also invited to perform as a full time member of T’ang Quartet from 2009 to 2011 and was featured as a soloist, alongside the quartet, at the Singapore premiere of Benjamin Lees’ “Concerto for String Quartet and Orchestra” with the Singapore Symphony Orchestra in 2010. During his tenure, Han has performed in numerous concerts at prestigious international music festivals in Singapore, Belgium, Australia, New Zealand, Macau, Malaysia and Indonesia.

Proudly Singaporean, Han made his mark as the first musician from his home country to have performed in top international festivals and awards such as the Grammy Awards, Coachella Valley Music Festival and Lollapalooza. He was also the only Singaporean to have performed with the American Idol Band and has toured with the multi - platinum Grammy - winning band, Gnarls Barkley.

An accomplished concert artiste, chamber musician and conductor, Han Oh has also established himself as one of the leading pedagogues for violin and viola performance in Singapore. He has groomed a number of students who have been accepted into top music schools around the world such as Indiana University, Boston University and the Yong Siew Toh Conservatory of Music.

He serves as both conductor and instructor for the National Junior College String Ensemble, Methodist Girls Secondary School String Ensemble. Under his mentorship, both schools have achieved Gold and Gold with Honors respectively at the 2011 Singapore Youth Festival Central Judging. Both ensembles were also awarded the Certificate of Distinction at the 2013 Singapore Youth Presentation.