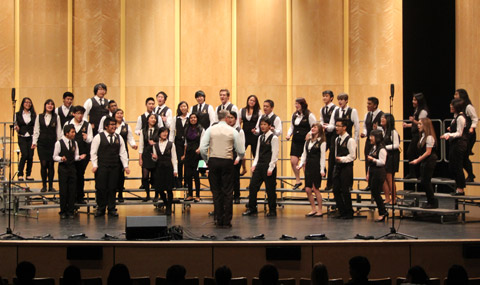 Johnston Heights is a public high school with a diverse student population of 1450 located in Surrey, British Columbia, Canada. The choral & band programs are year long, a relatively recent change that has had an immensely positive effect, enabling the ensembles to develop skills & musicality, along the way, forming a keen musical culture respected within the school & broader community.

The music program as a whole consists of five bands, largely under the leadership of Mr. Keith Honeywell, & four choirs & has a combined enrolment of 540 students.

The Choral program is in its fifth year under the directorship of Alan Holmes. These past five years have seen the program grow from a single senior choir of 17 students (with one brave boy) to four choirs of 320 enthusiastic singers in grades 8 through 12, about 50% of whom are boys. All choirs are open, meaning that all students have the opportunity to sing, regardless of musical training. The Chamber Choir, now in it's second year, is the only auditioned ensemble. Though repertoire is primarily rooted in western classical music, each choir is challenged with repertoire from diverse cultures & traditions, reflecting the ethnic diversity of the school population. Students study technique, musicality, language & interpretation in depth & are held to a very high standard.

Both directors strive to foster a sense of belonging to a close musical family & are thrilled to see their students enthusiastically rise to the challenges of demanding repertoire.

In the 1st full year of the choral program the Senior Choir won an invitation to MusicFest Canada in Ottawa, where they surprised many of the well established groups by placing in the silver category. Since then the choir has grown in size and musical skill winning gold at both the 2012 Kiwanis Festival and the 2013 Whistler Cantando Festival.

We are ecstatic to be selected for the competitive portion of the program and are looking forward to sharing our music with the other groups & adjudicators. Our philosophy to our singing is simple: SING FOR THE LOVE OF SINGING! 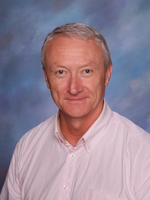 Alan Holmes started teaching at Johnston Heights in 2006 as a co-director with Keith Honeywell, teaching grade 8 band and special needs classes. In the fall of 2008 Mr. Holmes took on the choral program which consisted of the Senior Choir with 17 members; today it is a full time stand-alone choral program consisting of 320 students with a ratio of almost 50% boys.

Mr. Holmes received his BMus (with a major in clarinet) & Teaching Degrees from the University of British Columbia in Vancouver. He has undertaken further studies in conducting & singing. He has also sung in several choirs in the Metro-Vancouver area.

Alan is, at the very least, passionate about music and the choral art form. From his very first day teaching choir at JH, he encouraged students to reach for their very best. He is a talented & energetic conductor & leader, engendering great loyalty in his students & famous for pushing them to expect excellence. The motto for this year which is written on the white board in the choir room is “Risk so you can Thrive”.... in all aspects, challenging limits & risking ourselves emotionally, intellectually and spiritually.

"In terms of my career there is nothing else I would rather be doing than working with these awesome and talented young people! The emotions are real and nothing is held back in our quest for deep personal and group expression. In the end it is all about the group and what we all bring to our audiences, choir members & conductor. We cherish this very special time in our music program, the relationships we have made and we all will remember just what a special and lucky time these past few years have been. We are more than excited as we prepare for & anticipate our trip to Europe this year."