The Britten Youth String Orchestra was founded in 2007 by their conductor Loes Visser. She created the orchestra to provide a platform for young talented string instrument players that want to develop their skill in an inspiring, high level, and musically demanding environment. The joy to play wonderful Music however is very important and always present. Loes Visser and the orchestra are closely related to the ArtEZ Conservatory in the Netherlands. The symbioses between the three yields fine young musicians that are ready to go on in a musical education at the conservatory.

The Britten Your String Orchestra aims to perform with young talented soloists and inspiring soloists of more experienced level. Every year the orchestra performs with the winners of the Britten Violin or Cello competition. Among the great soloists that played with the orchestra are Daniel Wayenberg (piano), Liza Ferschtman (violin), Maria Milstein (violin), Gavriel Lipkind (cello), Anna Lipkind (violin) and a performance with Charly Siem (violin) is planned in March next year.

Every year the orchestra performs in about 20 concerts throughout the Netherlands and during the annual tour. The orchestra has performed for the Dutch Royal family twice and is a regular guest in Dutch theaters and country estate concerts.

At the end of each season the Britten Youth String Orchestra records a CD. The 5th CD is about to be launched. Former CD’s were well received by Dutch classic radio and press and were often praised for their sound and profoundness despite the young age of the musicians.

For bookings and more information please go to www.hetbritten.nl. 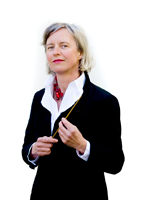 With her own Adamello Ensemble which she founded in 1990, Loes Visser performed in special locations with special programs with two programs around Dutch women composers Alba Rosa Viëtor en Henrietta Bosmans, 8 tours to Italy and a series of Young Person’s Concerts in the spirit of the great Leonard Bernstein. Most radical were the concerts performed with the ensemble inside the Dutch jail in Scheveningen.

Loes Visser loves to conduct opera. She conducted a.o. the West Side Story with ballet and seldom heard opera’s like Puccini’s ‘les Villi’ and ‘Rothchild’s violin’ by Fleishmann/ Shostakovich, but also many concertante aria’s from Tosca to la Bohème.

In 2007 Loes Visser founded the Britten Youth String Orchestra for young talented musicians. She leads the young string players to great performances and success in their passion to grow as musicians.

Loes Visser studied violin with Bouw Lemkes and viola with Jürgen Kussmaul before switching to studying conducting at the Sweelinck Conservatory in Amsterdam and the Royal Conservatory in the Hague in the Netherlands. She studied conducting with Ru Sevenhuijsen, Ed Spanjaard and Lucas Vis. She followed master classes in conducting with Bernard Haitink, Ilja Mussin, Constantin Bugeanu, Franco Ferrara and Guennadi Rozdestvenski.