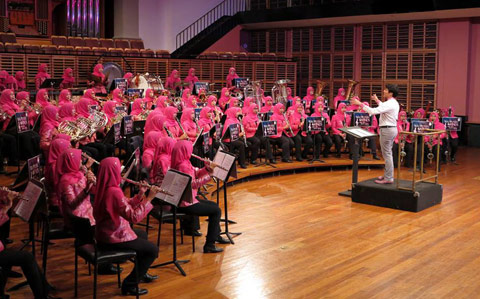 The Seri Puteri Symphonic Winds (SPWinds) aspires itself to become the finest youth ensemble in Malaysia. Founded in 1976, this celebrated orchestra of a leading institution Sekolah Seri Puteri has since then became the ambassador of cultural and youth performances in the country. Promoting Malaysian culture through the medium of symphonic band music, the ensemble has been privileged to premiere works of local composers and arrangements of folk music, and perform these works on world stage including the Sydney Opera House. As a pioneering and promising orchestra, SPWinds enjoys receiving the honor to perform before Royalties and international delegates including the wife of French Prime Minister, Madame Ayrault.

Under the baton of its director Mr. Raja Muzafar, the desire to perform with high degree of finesse is at the heart of each and every performance. This commitment to musical and technical excellence has been very rewarding, as SPWinds reigned to be a regular Champion and received nothing less than the GOLD AWARDS at the prestigious National Wind Orchestra Competition since its inception in 1997. Having attained the GOLD AWARDS at the Australian International Music Festival (AIMF) 2013 and Singapore Band International Festival 2012, SPWinds continues to celebrate its success and credentials at international scene. At AIMF, SPWinds received high commendations by the faculty and was given the honor to perform as the Command Ensemble at the festival’s closing ceremony.

Renowned for its exciting repertoires and diverse concert performances, SPWinds has continually enthralled audiences especially during its annual concert series entitled “Flourishes” inaugurated in 2010. Within the supervision of Miss Shahriyah Rashid, these diligent young girls of Seri Puteri Symphonic Winds are dedicated to deliver enthusiastic performances and bring sheer joy to the audience. SPWinds embraces music as the common language of humanity and believes in the ability of instrumental music to promote greater appreciation of other cultures. Through their sincere musicianship, SPWinds hopes to bridge the gaps of cultural differences, and eventually bringing the world to a greater harmony. 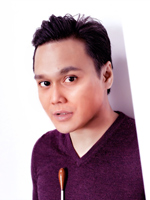 Raja Muzafar started to involve keenly in the symphonic band arena as he commenced learning tuba at the age of 13. As a member of a pioneer youth wind orchestra in the nation, he travelled the world attending masterclasses and participated at international festivals and concours. The wealth of experience he acquired during his teenage years has shaped the musical integrity within him and instills devotion towards symphonic band performance.

Ensembles under his directions have received successions of Gold Awards and Outstanding achievements at national and international festivals. As a young director, his commitment to musical growth has made it possible for these ensembles to perform with highest finesse. Besides his dedication to elevate the standards of local wind band scene in Malaysia, Raja is also passionate in the works of local composers and arrangers promoting them as distinctive wind band repertoires worldwide.

His development as a conductor started in 2008 as he attended the Canford Summer Conducting School, studying with Timothy Reynish, Philip Scott, and Baldur Burnnimain. However, he acquired most of his orchestral conducting techniques from Denise Ham, conducting lecturer at the Royal Academy of Music. Currently, Raja is pursuing Masters in Symphonic Wind Ensemble Direction at the London College of Music under the tutelage of Simon Haw and Stuart Morley.