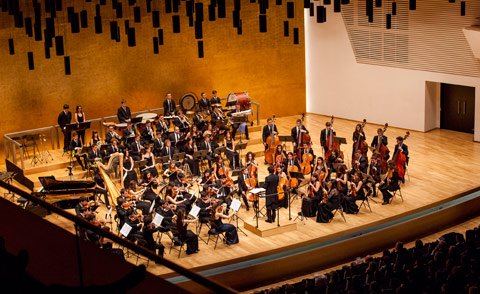 The Alicante´s Province Youth Orchestra, established in 2009, is the result of the passion for classical music among a large group of young people led by their conductor,Francisco Maestre. The OJPA´s aim is for young musicians to improve and complete their musical training within the orchestra, whilst having the opportunity to learn from renowned soloists and teachers who accompany them during their performances. Among these considerable soloists are: José Sempere, Edicson Ruiz, Suzanne Kantorski, ‎Alok Kumar, María Eugenia Antúnez, Marcelo Guzzo, Andrei Frolov, Fabiane De Castro, Pepa García-Maciá, Mª José Sampere, David Cervera, Myriam Snouk, Mario González, Rafael Vázquez, Pepe Cabrera, Marcos Sanjuan, María Maciá, Ignacio Rodes, Natalia Millán…

The Orchestra, since its inception, and with the support of the Provincial Council of Alicante, has performed in the largest auditoriums within the province of Alicante and Spain. In early January 2012, the OJPA performed one of its major concerts at the Monumental Theatre in Madrid, home of the RTVE Symphony Orchestra, with great success.

The OJPA has been the Orchestra in charge of the Concert of Europe in the Auditorium of the Provincial Council of Alicante (ADDA) for two consecutive years. In August 2012 the orchestra participated in one of the most prestigious European festivals: Music Festival Schleswig-Holstein, Hamburg, Germany. The young musicians performed two concerts charged a special Spanish flavor.

From 26 to 30 July 2013, the OJPA hosted the First International Festival of Youth Orchestras in Alicante, where shared the stage with TWIS Youth Orchestra of Brussels, Jugendorchester Oberthurgau Switzerland and Young Provincial Orchestra of Malaga.

In August 2013, the OJPA traveled to France In order to participate in the International Youth Festival Eurochestries, presenting   five concerts and having all its members selected to be part of the International Festival Orchestra. In November 2013 the Orchestra performed for RNE recording (Spanish National Radio) the famous Mozart's Requiem as part of the campaign "a toy an illusion". Further on, in December the same year, the Orchestra will share the stage with Edicson Ruiz, the bass soloist at the Berlin Philharmonic Orchestra and Theresia Kluger, the first violin of the Vienna Youth Philharmonic Orchestra. 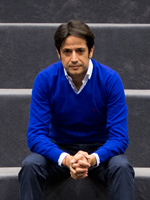 Francisco Maestre began his musical studies at the age of six in Alicante. Later on he enrolled in the Conservatory of Music Oscar Esplá in Alicante, where he attended advanced studies in violin and chamber music, wining prices and Honorary Thesis. Years later, within the same conservatory, he holds the Chair of Violin.
He completed his Conducting training in Spain under Maestro José De Eusebio. For three consecutive years he was selected to participate in the Annual Conductor´s Program in St. Petersburg with the Maestro Alexander Polyanichko.

His commitment to Music and contemporary Composers has led him to perform the Premiere of The Martinsson´s Double Bass and Orchestra Concert in Spain with Edicson Ruiz soloist at the Berlin Philharmonic Orchestra and the European Premiere of the opera "Oh My Son", composed by Marcos Galvany. In July 2014 will present the piece of Oscar Navarro "Libertadores" in Vienna and will perform the Premiere of the Guitar and Orchestra Concert by the composer Simone Iannarelli at the International Guitar Festival "José Tomás" Villa Elda.

Among its commitments for 2014 are to lead the Region of Murcia´s Symphony Orchestra , the Milano Metropolitan Orchestra, Youth Philharmonic Orchestra of the Mariinsky Theatre of St. Petersburg with the soloists Edicson Ruiz, Raquel Del Val, Àlex Garrobé, Carlos Piñana y Thierry Begin-Lamontagne. In July of this year will make its debut at the Musikverein in Vienna.