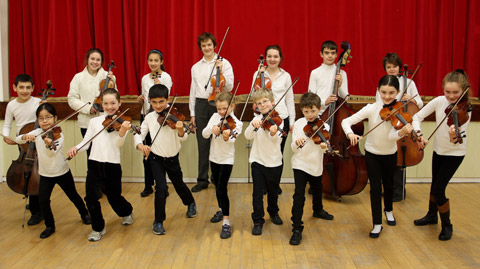 Students of Young European Strings Intermediate Orchestra start their musical studies in this school of music between the age of three and four years and continue their musical studies until the age of 18 years. The students presented here in Vienna are aged between eight and sixteen years and they have accumulated about five to eight years of instrumental studies. They meet once a week for an hour orchestral practice during the school year and receive regular sectional rehearsal when preparing for a public concert or competitions under the baton of the Director of the Young European Strings School of Music Maria Kelemen. On this occasion we take pleasure in introducing our guest conductor, the Artistic Director of Young European Strings Ronald Masin.

Young European Strings Intermediate orchestra is the stepping stone for the members of the School who outgrew in their technical knowhow the level of the repertoire of the junior orchestra and aspire to play the more complex works of the baroque, classical and contemporary composer’s works, composed for string orchestra.

The orchestra's repertoire presented at this Festival is composed of a mixture of 19th and 20th century music. When travelling abroad we always include in our program a piece by an Irish composer. For this Festival we will present a work commissioned by the Young European Strings School of Music and dedicated to the same, by Raymond Deane an Irish composer (b. 1953-). This work is a pastiche inspired by the close resemblance of certain Irish traditional songs, in this case composed by the blind Irish harpist and composer Turlough Carolan (1670-1758) to the baroque music of Henry Purcell (1657-1695) with it's embellishments of turns and mordents. The title of the work we are playing from the Baroque Session is: "Purcell and The Blackbird”. The work is written in the time signature of the "Hornpipe".

The rest of our program is a movement entitled "Ostinato" from the St.Paul's Suite for strings by Gustav Holst (1874-1934) and the Rakoczi March from the Opera "Damnation of Faust" by Hector Berlioz (1803-1869). 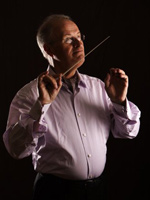 Professor Ronald Masin joined YES as Artistic Director in 2002 from the DIT Conservatory of Music and Drama in Dublin where he held a senior lecturing position.

Born in Rotterdam of Czech-Dutch parentage, Ronald Masin started his violin studies at the Rotterdam Music Conservatory at the age of five. In 1962, he obtained his violin and chamber music diplomas from the Royal Music Conservatory of Brussels with the highest distinction. At the age of twenty-five, he was offered the Leadership of the Amsterdam Philharmonic Orchestra where he stayed until 1984. In 1967, he formed a chamber music group, the Amsterdam Kern Ensemble. During its eleven years of existence, the Amsterdam Kern Ensemble performed over 600 concerts in 22 countries, recorded for EMI and commissioned and performed a large number of works by contemporary composers.

From 1984 until 1986, he was Associate Professor and Head of the Strings Department at the University of Cape Town, South Africa. From September 1987 to 2002, he was Senior Lecturer at the D.I.T. Conservatory of Music and Drama in Dublin and a regular guest teacher at International Masterclasses in Ireland and abroad. He is founder and artistic director of the Music Instrument Fund of Ireland. Professor Masin instructs students in the Senior Programme at the School.