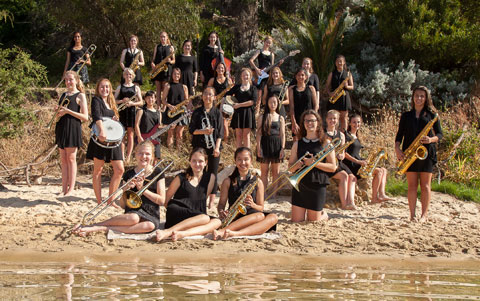 Methodist Ladies’ College Jazz Band is made up of around 20 girls between the ages of 13 and 17. One of only several school jazz ensembles to have performed regularly at the Montreux International Jazz Festival in Switzerland (2008/11), the MLC Jazz Band enjoys a reputation as a leading girls' jazz ensemble.

The MLC Jazz Band returns to Montreux in 2014 and it will also be host to a series of workshops at Methodist Ladies College, entitled "Girls in Jazz". The collaboration, aimed at increasing girls participation in jazz is in collaboration with the WA Youth Jazz Orchestra and Sydney Improvised Music Association.

The Jazz Band plays a wide range of classic repertoire and is introducing a couple of Australian charts to its program in 2014. Along with the usual Jazz Band instrumentation, vocal soloists from the College also line up from time to time. The Jazz Band is conducted by West Australian Academy of Performing Arts graduate Mr Brett Smith. 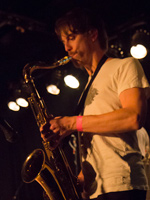 Brett Smith is a saxophonist, composer and sound designer based in Perth, Western Australia.  A 2008 WAAPA graduate, Brett was the recipient of the Bendat Family Trust Scholarship for musical excellence. From 2009 to 2010 Brett travelled extensively throughout Europe where he undertook a secondment with minimalist composer Marin Pavon and the Museum of Flamenco Dance in Seville. He then utilised scholarship funding to study free improvisation and composition with Tony Malaby, Ellery Eskelin and Angelica Sanchez in New York. On returning to Perth, Brett completed his honours in Jazz Performance and since has studied percussion and contemporary dance accompaniment under Wency D’Souza whilst working as an accompanist at WAAPA.

Brett is currently an emerging artist with Black Swan State Theatre Company and is performing at the Montreux Jazz Festival with the Methodist Ladies College Jazz Band in 2014.