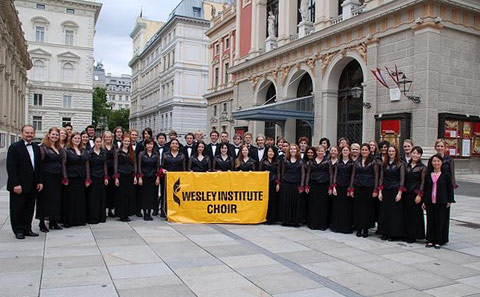 Wesley Institute Choir comprises about 50 young people training for professional careers in the music industry. They perform a wide range of musical styles from Classical to Contemporary Christian. Under the direction of Mr. Sadaharu Muramatsu, the choir amasses a significant body of artistic talent of students.

Born in Japan, Sadaharu Muramatsu graduated from the Royal Northern College of Music in Manchester, UK, with a Master of Music (MMus) in conducting. Granted a fellowship under the Japanese Government Overseas Program for Artists from 2008 to 2010.
In 2001 Sadaharu won the first prize at the ISIS conducting Competition in Cambridge, UK, and in 2005, he was awarded the Mortimer Furber Prize for Conducting in Manchester, UK. Sadaharu was one of the semi-finalists of the 2007 Bela Bartok International Opera Conducting Competition in Romania. In the same year he was one of the finalists in the Emmerich Kalman International Conductor’s Competition in Budapest, Hungary, and awarded the special Jury Prize. Broadcast from the Budapest Operetta Theater by Hungarian Television, he conducted “Gräfin Marizza” and “Die Csardasfürstin”.
In 2007 Sadaharu conducted the Japanese premiere of the Broadway musical “The Light” in the Piazza in Tokyo, and in 2008 he conducted a youth orchestra for a musical education program for the Japanese government.
He has conducted several operas including “The Marriage of Figaro” (Mozart), “Hansel and Gretel” (Humperdinck), “Il Signor Bruschino” (Rossini), “Seven Deadly Sins” (Weill), “Il Campanello” (Donizetti) and many other operas. Sadaharu studied conducting under Kurt Masur, Sir Mark Elder, Gianandrea Noseda, Imre Pallo, Christian Mandel, Hirofumi Misawa and Kazuki Sawa.
Biography: www.sadaharu.net