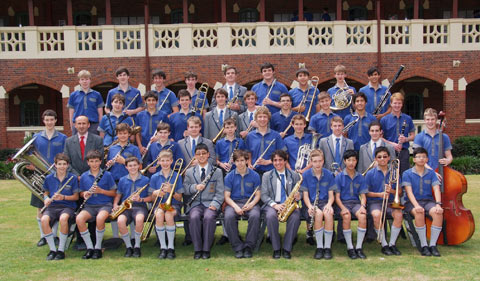 Morris Wind Symphony is Anglican Church Grammar School’s (Churchie) senior concert band. It comprises most advanced instrumental students from the Middle and Senior School with the average age of 15.
Over the last 5 years the band has won numerous awards and accolades in ensemble competitions and festivals around its home state of Queensland, Australia. The ensemble’s ongoing aim is to engage in serious band literature that explores various styles of music from the Renaissance to the avantgarde.
2012 marks the 100th Anniversary of Anglican Church Grammar School and Morris Wind Symphony is proud to be undertaking its first international tour leading up to such an important year in the school’s history. The boys of MWS are very much looking forward to meeting other student bands from all around the world to share and experience all they can about fine music-making. 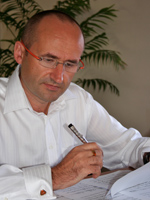 Paul Kopetz has been involved in music since the age of 6. He was educated at The University of Melbourne (Bachelor of Music in clarinet/bass clarinet and composition), The Victorian College of the Arts (Graduate Diploma in Music Performance), the Rotterdam Conservatorium (postgraduate studies in bass clarinet and chamber music) and Monash University (Graduate Diploma of Education). Since 1990 Paul has developed a reputation as an active instrumentalist, composer, arranger, conductor and educator.

As an instrumentalist Paul’s career highlights include appearances as Guest Principal Bass Clarinettist with The Melbourne Symphony Orchestra, solo clarinet in Topol’s “Fiddler On The Roof”, and recording sessions for radio, film and television. He has recorded for IMAX and the Naxos label. Paul has performed with the Tasmanian Symphony Orchestra and the Queensland Symphony Orchestra, and has worked with musicians such as Marcus Stenz, Hiroyuki Iwaki, Pascal Tortelier, Osmo Vanska, Oleg Caetani, Steven Isserlis, Diana Krall and Paul Grabowski.

As a composer and arranger Paul’s music has been performed in the USA, Hong Kong, Japan, Holland, Poland and Australia. He has produced over 120 arrangements for various ensembles ranging from small student groups to full symphony orchestra. His current style of original composition aims at the fusion of Pop music styles with traditional and contemporary Classical music focusing on exploration of rhythm and contrapuntal textures. He is particularly interested in programmatic chamber music. In 2010 Paul’s “Valse Triste” for string orchestra was premiered at the International Festival of Film Music in Lodz, Poland.

Since his appointment in 2005 to the position of Head of Instrumental Studies at Anglican Church Grammar School in Brisbane (Australia) Paul has been able to establish a strong and dynamic band and chamber music program catering for all ages of students in the form of 5 concert bands, a Preparatory School Instrumental Program, and a range of regular small ensembles. Paul’s growing interest in conducting has been assisted by his participation in the Symphony Australia Conductors’ Development Program and regular work with community bands and orchestras. Having experienced the excitement and challenge of international touring as a student musician, Paul is thrilled to be able to lead a group of fine young instrumentalists from Churchie on their first international tour.