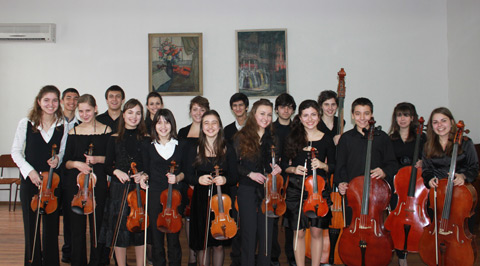 The State music College in Plovdiv was founded in 1945 and since 1995 is named after the great bulgarian violinist and conductor Dobrin Petkov. The School is proud to have brought up many of the most important musicians, that represent the bulgarian music culture all around the world - the pianists Emma Tachmisian and Aglika Genova, violinists Kevork Mardirosian, Micho Dimitrov, Eugeniy Chevkenov, Mario Hossen, Yasen Todorov, conductors Dian Tchobanov and Nayden Todorov, opera singer Sonya Yoncheva etc.
The Orchestra of The State Music College "Dobrin Petkov" exists from the very beginning in 1945 and through the years has taken part in numerous festivals and concert-tours in Germany, France, Poland, Belgium, Holland, Slovakia, Chech Republic etc, where this young ensemble has been awarded many prizes and has been welcomed by international audiences.
The Orchestra has been recorded and broadcast by The Bulgarian National Radio and Bulgarian National Television and has special concert-series every season, which represent it regularly in its home town of Plovdiv, an ancient city with 8000 years of history, together with Damascus and Athens one of the three oldest cities in the world.
The young musicians who build the string orchestra today and will be taking part at 2011 Summa cum Laude Festival - Vienna are between 13 and 18 years old and are all involved in soloist and chamber music activities in the school. 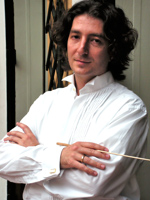 Eugeniy Chevkenov was born on March 8th 1971 in Plovdiv, Bulgaria in a well-known family of musicians. He holds Master of performing Arts Degrees from The National Academy of Music Sofia and The University of music and performing Arts Vienna and has been awarded numerous international Prizes and Awards.
During his studies, for several seasons he played in Vienna Philharmonic, taking part at Salzburger Festspiele, CD-recordings and world-wide Concerttours of this exceptional orchestra. In 2000 he was awarded Honor-Citizenship by the Government of Austria and the Mayor of Vienna, for his extraordinary achievements as a musician. His exceptional career has brought him to perform in 35 countries worldwide (USA, Japan, China, Mexico, the most European countries) in some of the most prestigious and famous Halls: Carnegie Hall New York, Musikverein and Konzerthaus Vienna, Bellas Artes Mexico City, Osaka Symphony Hall, Tokio Metropolitan Arts Center etc.

In 2002 Chevkenov founded “Ensemble Concertante Vienna” and won international recognition as its Soloist and Conductor, in Europe, North America, China. In 2006 The President of Austrian Parliament Mrs. Barbara Prammer took “Ensemble Concertante Vienna” under her Patronage. In 1999 he recorded for “Gramolla - Vienna” Vivaldi´s “Four Seasons”, in 2002 in Salzburg was produced his CD “Recital”, in 2005 the CD “Eugenius”– at “Kalrec – Vienna”.
1997-2001 Chevkenov teaches at The Summer Academy at Theresianum, Vienna and since 2000 has been Violin-professor at “Gustav Mahler Music Conservatory”, Vienna. He has taught Master- classes in USA, China, Japan, Austria, Bulgaria, Greece, Italy and had the honor of being a Jury- Member at “Franz Schubert International Competition” Russe 2005 and “Dobrin Petkov International Violin Competition” Plovdiv 2007.