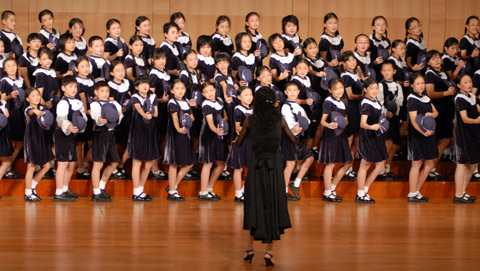 The Children’s Choir of Shenzhen Experimental School Primary Section was founded in 1992. Up to now, it has gained favorable reputation in Shenzhen.

The Children’s Choir has attended The City Choir Competition Chorus since 1995 and won the First Prize five times and obtained the title of four-year Championship.

In 2002, the Children’s Choir received the invitation from Shenzhen Television Station to attend the opening performance of The City Environment Protection Award Party.

In 2004, China Central Opera House had three performances of Carmen in Shenzhen Grand Theatre. The Children’s Choir was invited to act the children’s part and sing Street Teenager and other songs of the opera.

In 2006, American Broadway Music teleplay group came to Shenzhen and gave the performance of The King and Me. The Children’s Choir was invited to take part in the selection of Young Actors.

On August 31, 2006, in order to host the World University Games for Shenzhen, The Children’s Choir was invited to meet with Chairman of the International University Games Association George Kilian and his wife. Kids sang two English songs, The Moon on the Coralado River and Sing.

In 2008, the Children’s Choir was awarded The Excellent Red Scarf Club of Guangdong Province due to outstanding performance. 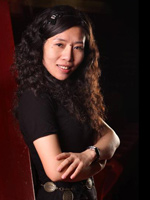 Ms. Du Hong graduated from Wuhan Conservatory of Music. From November, 1995, Ms. Du Hong has been working in Shenzhen Experimental School Primary Section. As a responsible and industrious teacher, she has led the Children’s Choir to attend many competitions and won numerous awards and prizes.

In the Shenzhen Lychee Cup Singing Contest of 1998, Ms. Du won the title of Shenzhen Top Ten singer. In the same year, she also received the prize of Medal of Pengcheng Youth Talent in the Municipal Talent Selection.

In 2004, Children’s Choir of Shenzhen Experimental School Primary Section attended the Seventh Municipal Middle and Primary Schools Choir Festival. Ms. Du took in charge of the whole competition and the Children’s Choir finally received the Second Prize, which was highly honored by the school leaders.

Ms. Du Hong loves music and enjoys imparting knowledge to children. She wants to shares Chinese music with music lovers around the world. In the meantime, Ms. Du Hong hopes her students can take opportunities to appreciate world music and upgrade themselves.