The CCOC is the only permanent children's opera company in Canada that commissions and produces operas for children on a regular basis. Having commissioned and premiered half a dozen children’s operas in the first 25 years of its existence, the CCOC has redoubled its determination to create a viable canon of children’s opera in recent years. Two fully staged premieres and a workshop in the past four seasons complement plans for two more fully-staged new works in the next three years. Children are involved every year in a production with high-profile professional directors, designers, singers and coaches drawn from the Canadian and international opera community.

The company regularly collaborates and performs with other leading arts organizations, such as the Toronto Symphony Orchestra. Five commercial recordings have been released including the 2006 recording of A Midwinter Night’s Dream that garnered a Juno nomination in 2007. The CCOC’s second European tour, to Central Europe in summer 2007, was met with critical acclaim. Members of the Principal Chorus participate each season in concerts, a fully staged opera production and numerous other performance and recording opportunities as well as appearing with leading performing arts groups. Principal Chorus members participate in vocal training, drama workshops and tour programs and dramatic training is provided by resident drama coaches in addition to guest directors and choreographers.
The Canadian Children's Opera Chorus was founded in 1968 by Ruby Mercer and Music Director Lloyd Bradshaw specifically to provide a stable source of child singers for productions of the Canadian Opera Company.
In 2002, the CCOC introduced the Canadian Youth Opera Chorus for boys with changed voices and girls ages 16 to young adult in order to provide further training and experience as a bridge to university programs.
In 2008, the name was changed to Canadian Children’s Opera Company to reflect the significant amount of work the CCOC does in presenting full-scale productions and commissioning new operatic works created for children to perform.
From 32 original members, the CCOC has now grown to over 200 children and youth participants, ages 5-19, with 90 of those in the Principal Chorus. 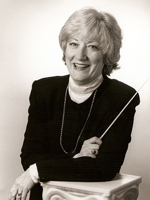 Ann Cooper Gay is an accomplished conductor, opera singer, pianist, organist, and flutist, well known in the artistic community for her extraordinary enthusiasm, energy, and consistently high level of artistic achievement. During her tenure, which began in July 2000, Ms. Cooper Gay has formed a youth chorus; established a drama instruction program for all divisions; produced a CD entitled There and Back Again; commissioned four operas; and led the CCOC in a recording of Harry Somers’ opera A Midwinter Night’s Dream, nominated for a Juno award in 2007.

Before joining the CCOC, Ann served as conductor of the University of Toronto Women’s Chorus, Associate Conductor of the Hart House Orchestra, University of Toronto, and string/orchestra instructor for the Toronto Board of Education. She founded the award-winning High Park Choirs of Toronto and served as their Artistic Director for sixteen years. She was honoured by the Toronto YWCA as a “Woman of Distinction” who “has made a profound impact on an entire generation of young musicians in Toronto.” In April 2007 Ann led participants to the Toronto Mendelssohn Choir’s “Singsation” in a session on opera and operetta choruses. She took the CCOC on a tour of Austria and Hungary in June and July and then returned to Europe in August as Music Director/Conductor for the youth opera production in Limerick, Ireland at the “Summer Music on the Shannon” Festival.

Ms. Cooper Gay holds Bachelor’s and Master’s degrees in Music and Music Education, as well as a Diploma in Opera Performance. Before becoming Assistant Professor of Music at Houghton College in New York, she was a soprano soloist with the Canadian Opera Company, touring throughout North America as Despina (Così fan tutte), Mimì (La bohème) and Violetta (La traviata). Ann can be heard as Sara Riel on the Centrediscs recording of Harry Somers’ Louis Riel, recorded live at Washington’s Kennedy Center.