Chamber string orchestra MUSICA IUVENALIS was created from non-professional chamber music body at previous Public music school at Sverdlovova street in 1964 as a member of this school.
Members of orchestra are primarily students of high schools and universities, who are mostly the amateurs dedicated to the music, but Musica is also composed of full-time employed adults.
Members of orchestra meet at regular practice hours twice a week in the room of the music school. Three hours marathon of hard work, fun and music. And the result public can listen at regular Christmas, Easter and annual concerts, balls, fairs, shows, but often also at music festivals in Slovakia or foreign countries. Orchestra MUSICA IUVENALIS has received many awards in home country and abroad during its long history. Orchestra participates in Festival of non-professional chamber and symphony bodies. "Divertimento Musicale". It became a one of top European orchestras in this category at European junior music festival in Belgian Neerpelt by receiving a first prize for several times, also with special congratulation from the Jury. Many invitations and participation at European junior festival of music in Portuguese Vila Nova de Gaia were rewarding for long time work. Orchestra is represented succesfully at concerts and festivals in France, Austria, Czech republic, Japan, Portugal, Poland, Hungary, Germany, Ukraine, Scotland, Belgium, Jugoslavia and Spain. Orchestra is the main organiser of the Festival for youth orchestra and choirs in Eastern Slovakia – Shengen Meridian, Eurochestrie Slovakia and also Košice´s opereta festival. Orchestra has prepared three opera productions and cooperated with Miskolc opera Festival. 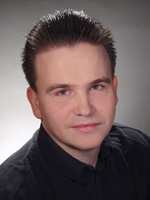 Igor Dohovič, conductor of the String orchestra MUSICA IUVENALIS, he is the conductor of State opera house Košice. He is a graduate of the Conservatorium of Music in Košice and gained his Masters Degree in opera-symphonic conducting at the Academy of music in Lviv, Ukraine, where he studied with well known experts Jurij Luciv and Mykola Kolesa. Since his return to Slovakia, he is working in opera house, he is director and organisator of many cultural projects and festivals-“Shengen meridian” – festival for youth orchestras and choirs –director, Kosice operetta festival-director, Opera as we doesn´t know-director. Like guest conductor he was invited to Ukraine, Poland, Hungary, Czech Republic, Belgium, Germany, Switzerland, France, Italy, Spain, Portugal, Scotland, Japan and tc. He is winner of the International conducting competition in Spoleto, Italy in 2003.