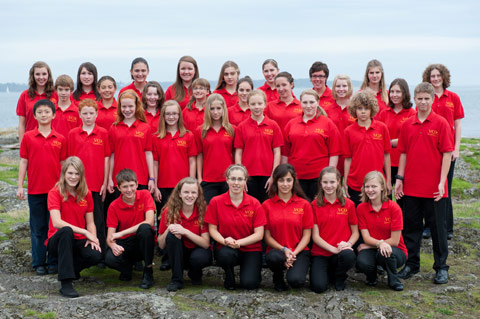 Who are the Victoria Children’s Choir? Eighty choristers whose love of singing and performance has led them to become one of Canada’s leading children’s choirs within their first 10 years.
With choristers ranging in age from 8 to 18 and led by Founder and Artistic Director, Madeleine Humer, the choir has achieved an outstanding level of performance. The choir receives regular invitations to collaborate with the Victoria Symphony Orchestra and has performed in Bach’s “St Matthew Passion”, Orff’s “Carmina Burana”, Mendelssohn’s “Elijah” and “Midsummer Night’s Dream”. Pacific Opera Victoria requests only VCC choristers and they have been awarded all the children’s roles in “Little Vixen”, “Die Zauberflöte”, “La Bohème” and “La Traviata”. Performances with Fretwork, the Pacific Baroque Orchestra and the international children’s entertainer Raffi, have contributed to the VCC’s diversity and quality for which they have become well known. The choir also benefits from workshops lead by Marc Destrubé of the Pacific Baroque Orchestra, Fretwork (Viol Consort), and Canadian composers Stephen Hatfield and Tobin Stokes. Major choral works including Haydn and Mozart Masses, Vivaldi’s “Gloria” in the original setting of SSAA, and sacred works by Handel, Bach and Telemann, are all performed with original instruments. Through rehearsals, music theory and concert training, the choristers continue to challenge themselves by learning all genres of music, in unison to 16-part harmonies. The 2010-2011 season highlights include: “Brundibár” a children’s opera by Czech composer Hans Krása, originally performed by the children in the Terezín concentration camp; “Requiem” by Heinrich Ignaz Biber; “Missa Sancti Nicolai” by Joseph Haydn.
In official circles, the VCC has become a recognized “voice”. The choir has performed, through invitations from the Governments of Canada and British Columbia, for visiting dignitaries including HM Queen Elizabeth II on her 2002 Jubilee Tour of Canada, and presented the official song of the 2010 Olympic Torch Relay at the ceremonies celebrating both the Olympic Flame’s arrival in Canada, and the start of the Olympic Torch Relay.
Our philosophy of celebrating the pleasure of music and song is found not only within the choir but also through giving back to our community. The VCC annually shares the stage with Victoria’s “Open Door Choir @ Our Place”, whose members come from the homeless community. The choir also raises the awareness of global environmental & social issues through their many annual performances.
The Victoria Children’s Choir is honored to be participating in the 2011 Summa Cum Laude International Youth Music Festival, which offers everyone what is truly the experience of a lifetime. 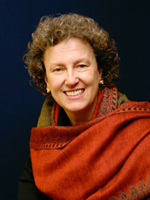 After her initial vocal and choral education in Victoria, Canada, Madeleine Humer continued her music studies at the Music Universities in Vienna and Salzburg, Austria. As an acknowledge soloist specializing in Baroque and Classical music, she has performed in concerts and Festivals in Europe and in North America, working with such internationally renowned musicians including Ton Koopman and Paul Hiller. More recently she has performed with the viol consort Fretwork and the Pacific Baroque Orchestra. Madeleine Humer’s own directing experience, particularly as the founder and current Artistic Director of the Victoria Children’s Choir, has resulted in invitations for her choirs to participate in international festivals and symposiums. Her choristers are regularly asked to perform as soloists in professional opera, orchestral and choral productions. She is a highly respected music educator, having inspired singers of all ages both in schools and throughout the community. Ms. Humer is also the Director of the St Christopher Singers, a specialist choir that sings the Choral Evensong at Victoria’s Christ Church Cathedral.