Founded in 1996, Mixed Chorus of Guangdong Guangya High School has ranked first in Guangzhou’s Chorus Festival for Middle Schools and Primary Schools for many times. It’s worth mentioning that, in the last two festivals, it has won two mixed chorus championships for its striking performance in succession. In the 10th Guangzhou Chorus Festival for Schools in December 2006, it won the first prize in the final. In 2007, invited by the Polish government, it gave a wonderful performance in the “Polish National Chorus Festival”. Recently in the 11th Guangzhou Chorus Festival for Schools in 2010, it remained to be among the first three prizes in the final.
There are 75 members in the chorus now, all of whom are music lovers from every grade, ranging from Junior 1 to Senior 3. Singing practice is set for all members every week. Since “harmony” is the notion and tradition of running Guangya High School, we hope that through choral training, students can have a better understanding of the idea of harmony and the spirit of cooperation, and grow up to be a good person with both virtue and ability. 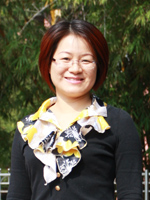 Ms. Liao Yanqing is a Senior Music Teacher in Guangdong Guangya High School, who majored in vocality in university and graduated from Music Department of South China Normal University in 1995. Ms. Liao is in charge of the tutoring and practice of the chorus, and has tutored the chorus in winning several first prizes of the mixed championships in Guangzhou Chorus Festival for Schools, for which she was awarded as “Best Director”. Besides, in 2007, Ms. Liao directed her team in the performance of the “Polish National Chorus Festival” and received high appraisal from the audience