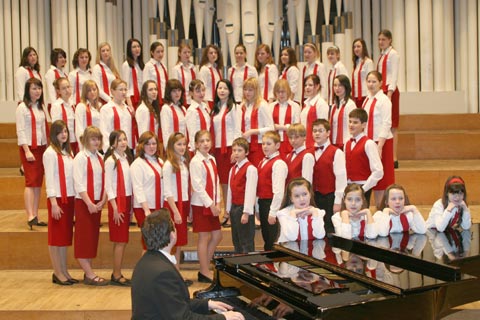 The Children's Choir performs on the Slovak culture stage for more than 50 years. Its founder was a prominent person of the Slovak music life, composer and conductor Ondrej Francisci. After his leave in 1978 the artistic leadership of the Choir was taken by Marián Vach and Jozef Svitek and from 1986 by Janka Rychlá and Mirko Krajci. They spread possibilities of the Choir's repertory, established its international reputation and developed its recording quality. Since its foundation (1953) the Choir has recorded more than 500 songs and cycles for radio broadcasting and some CDs. The Children's Choir has taken part in the music festivals in Bratislava, Brno, Prague and has organized concerts for Russian, Bulgarian, Hungarian, Austrian, German, Belgian, Italian, Turkish, Portuguese and French audience. The Choir was awarded the prizes in the international competitions in Italy, Germany and former Czechoslovakia.
After leave of the woman conductor Janka Rychla in 2003 the Choir ceased. The young conductor Adrian Kokoš became a new founder and creator of a new phase of the Slovak Radio's choir ensemble. Daniela Palová is a Choir's corepetitrice and Zuzana Vaseková is a voice teacher.
The newly established Choir (2004) has performed in many cultural events, at the music festivals such as Nitra Musical Spring, Ad Una Corda International Festival, the European Artistic School Festival etc. In 2006 it performed on the Slovak Philharmony
stage where together with the Bohdan Warchal Slovak Chamber Orchestra successfully premièred a cycle of 12 music miniatures "The Children writing to God" by the Slovak composer Juraj Hatrík. In December 2007 it presented together with the Slovak Radio Symphony Orchestra the world première of the vocal-instrumental work The Bethlehem, written for choir by the Slovak composer Vítazoslav Kubicka. The Choir regularly gives concerts, makes recordings and presents the premières of both the Slovak and world composers. It cooperates with the Slovak Radio Symphony Orchestra as well as with another orchestras, ensembles and conductors.
The Choir's repertory includes wide range of styles and genres - from spiritual music, through simple songs to heavy compositions of contemporary music. The Slovak Radio Children's Choir is interested in presenting the generation of young Slovak composers as well.
The Choir has performed with such prominent artists as L. Vargicová, A. Kucerová, N. Higano, M. Dvorský, O. Klein, D. Štefánek, J. M. Händler, M. Košík, E. Danel and others.

" The aim of the Choir or choral singing in this Slovak Radio´s ensemble is not only to create "MUSIC FOR THE SAKE OF MUSIC", but chiefly to allow the children access this genre so that it attracts them, give them pleasure, so that they understand it and know it. In this way they support its development in the future and foster the choral singing tradition in Slovakia." / Adrian Kokoš - the Slovak Radio Children´s Choir conductor/. 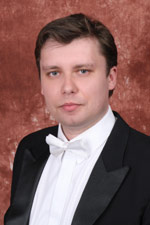 He studied choral conducting with doc. MgA Blanka Juhanáková and orchestral conducting with Prof. Ondrej Lenárd and Peter Feranec.
In 2004 he became the conductor of Slovak Radio Children's Choir. With this ensemble he gives concerts, makes recording and presents the première of works by famous Slovak and world authors as well. Since 2003 he has closely been cooperating with the Slovak composer Vítazoslav Kubicka.
He has performed the world premières of three composer's operas: The Rebirth (Znovuzrodenie), Martin Luther (nominated for Divadelné dosky 2005), Touch of Christ (Kristov dotyk) and a vocal- instrumental work Bethlehem. He cooperated with musical ensembles such as Slovak Radio Symphony Orchestra, Bohdan Warchal Slovak Chamber Orchestra, Solamente naturali, Chamber Soloists Bratislava, Trnava Chamber Orchestra, Church Conservatory Orchestra in Bratislava, Gustáv Brom Big Band etc. Since 2006 he has been cooperating with Johann Strauss Orchestra, Coburg (D). With this orchestra he has realized some concerts in Slovakia, Czech Republic and Germany. He has conducted at the important musical festivals: Bratislava Cultural Summer (2003), Musica sacra international festival in Nitra (2004), Festival of Sacred Art Košice (2005), Nitra Musical Spring (2006). As a conductor he performed at the 49th Smetana's Litomyšl International Opera Festival, where he presented the Slovak opera Touch of Christ (a Czech première 2007). During the 2007 Cultural Summer in Nitra and Bratislava he conducted a comic opera La serva pardona by Pergolesi. In October 2007 he conducted the Festive Concert of Slovak and Czech Music in Božena Nemcová Theatre in Františkove Lázne. A long-term cooperation with Kyrillomethodeon mixed singers choir, with whom he has studied a complete Tchaikovsky Liturgy, represents a notable part of his artistic activity. The repertory of Adrian Kokoš includes the works from various periods. From Baroque chamber music (Pergolesi, Zrunek) up to the vocal-instrumental pieces (Vivaldi, Mozart, Rossini, Gounod, Tchaikovsky, Dvorák, Krška, etc.). His repertory is extended also to the musical theatre area (Donizetti, Martinu, Kubicka), or to the light opera works by famous composers (J. Strauss, Lehár, Kálman, Dusík, etc.). He has cooperated with famed artists such as A. Kohútková, N. Higano, A. Kucerová, L. Albrechtová, M. Dvorský, O. Klein, E. Prochác, R. Kákoni, T. Nemec and others. Adrian Kokoš records regularly for Slovak Radio.