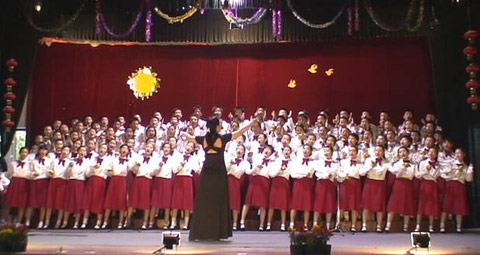 In affiliation with Xi'an Jiaotong University, the High School Chorus was founded in 1996. Currently, more than 150 students participate in the Chorus's various divisions, including orchestra, dance teams, band and choir.
This Chorus is taught by high-level, high-quality music teachers, many of whom are members of the Music Society and the province's Chorus Association. The students practice year-round, and participate in the university's annual arts festival, which has been hosted by the Xi'an Jiaotong University for the past 16 years. This festival celebrates China's distinctive and colorful cultural activities, and boasts more and more international cultural exchanges.
Xia'an Jiatong University and its affiliated High School are known for their excellence in education. The arts program, especially because of its focus on music, is the springboard for many talented artists. Promising students have gone on to Beijing University, Tsinghua University, the National People's Congress, Beijing Broadcasting Institute, the Chinese Academy of Music, and other famous institutions of higher learning.
The Chorus has participated in quite a number of international performances in countries such as the United States, the United Kingdom, Singapore, South Korea, Japan and others in order to establish friendly and cultural exchanges between schools. Its main goals are to enhance international friendships, to constantly improve and to reach for ever-higher goals. 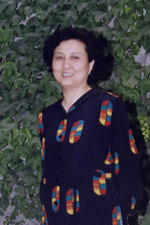 Zhang Yuerong was born in 1953. She graduated from Xi'an Musical College in 1975. Afterwards she has been working in key middle schools as music teacher and established medium-sized orchestra, choreography team and chorus team.
Her current position is as a director of Shaanxi Provincial Chorus Association. She is also a member of China's Musical Association. She is a certificated musical teacher in China Education Channel. Also she has the position as a Director of Art Teaching Section, Attached Middle School to Xi'an Jiaotong University.
Major Achievement:
1. Established the orchestra of Baoji Middle School in China and acted as the impresario.
2. Established the band of art the Middle School attached to Xi'an Jiaotong University, and being the impresario and chief director.
3. Beijing Awarded the special grade prize for six consecutive years in county-level chorus contest.
4. Beijing Award the outstanding teacher title and outstanding impresario several times.