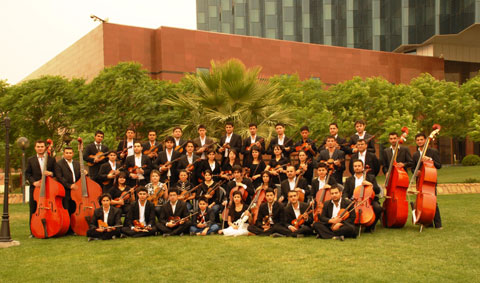 The "Kurdistan String Orchestra" was founded in March 2008 by Delschad Hothman and Abdulla Jamal Ashraf.

It comprises young musicians from all parts of the Kurdistan-Region of Iraq, most of them studying at the Institutes of Fine Arts in Arbil, Dohuk, Sulaimaniya, Raniya, Koje and Kirkuk. The first concerts took place in Arbil, Sulaimaniya and Dohuk in June 2008.

Mr. Abdulla Ashraf has been working for 10 years at the Iraqi National Symphony Orchestra as violinist, composer and assistant conductor and for 2 years as conductor at the Sulaimany String Orchestra. From Oct. 2004 - July 2006 he was teacher at the Department of Music, College of Fine Arts, University of Salahadeen.
In 1999 he won the first price at the symphony music composition organized in Baghdad. In November 2003 he presented a work titled Symphonic poem Nr. 2 with the Washington DC symphony at the John Kennedy Center.

He composed many works for Orchestra, especially for String Orchestra. He is teaching different subjects such as music theories, form, science of expressions, group of playing (Isnambil) as well as playing piano and violin.

Amongst others, Mr. Ashraf did research on issues such as Kurdish folk music. Furthermore, he translated the "Rudiment of Music" by William Lovelock and "An ABC of music" by Imogen Holst into Kurdish.