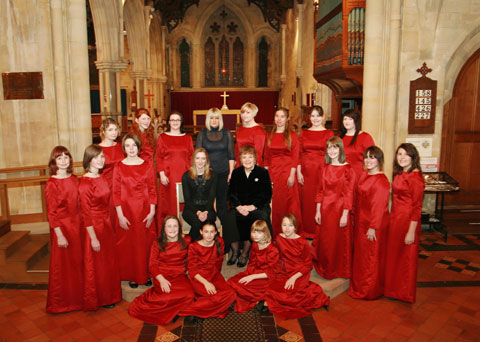 The Mid Powys Youth Choir was formed in the year 2000, when its leader retired from teaching music at a local High School and was asked by a pupil to form a Community choir.

Powys is a large, rural, sparsly populated county, situated in the centre of Wales. Wales has its own language, is part of Great Britain, with a population of approximately 3 million people.

The choir members travel from a wide area, to the county town of Llandrindod Wells, to rehearse and prepare for public performances which they give throught out the year.

The repertoire is mostly for S.S.A., with music to suit all tastes, both accompanied and acappella, religious and secular.

The choir has performed for British royalty, appeared on radio and television, made a C.D., taken part in various competitions including Wales own International Festival, The Llangollen International Eisteddfod, where the girls enjoy meeting and singing with competitors from throughout the World.

This will be the first overseas tour for this choir, although some members have already toured with Eleanors school choir which sung in Vienna. The girls are all looking forward to joining the Festival and singing and meeting with the Youth of the World. 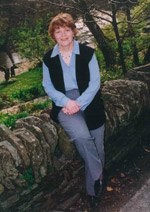 Eleanor Madoc Davies made her first public appearance as a singer at the age of three, when she sang solo in a Chapel Festival. At the age of twelve, a prominent business man heard her and recommended that she have singing lessons. She was soon in demand to sing throughout Wales.

Music has been Eleanors life. She trained in London and Birmingham before returning to Wales, where she continued with her singing career, but also started teaching music. In the year 2001 she graduated with a Masters Degree from the University of Wales, studying the Development of the Female Voice, and singing a recital in five languages.

One of the highlights of a busy singing career was performing the role of the Queen of the Nights (The Magic Flute-Mozart) with a Welsh Opera Company. Also travelling with different choirs throughout Europe as guest soloist.

Eleanor enjoys conducting and passing her knowledge and enjoyment of singing to the young people in her choirs and to the audiences to whom they perform.