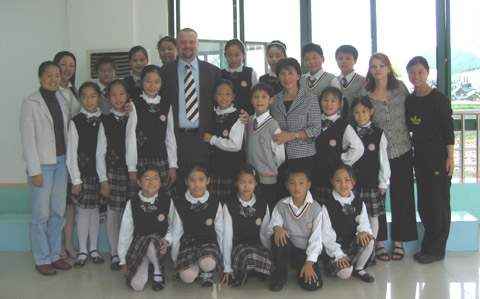 The Sunshine Choir of the Haimen Experimental School in China is named for the light of the sun and brightens everybody's day like sunshine! In 2003, various Haimen Experimental School choirs were consolidated into one children's choir. This Sunshine Choir currently consists of 80 children, on average 9 years old, with the youngest starting at 7 years.
Conducted by Bian Rui Juan, the Sunshine Choir practices every day at dawn and at dusk, gathering near the school at the side of a lake. Glorious songs fill the air, the children's voices like those of angels sharing every feeling, every emotion. Through music, the students are able to conjure up China's magnificent mountains, luscious landscapes and rushing rivers.
In just the past few short years, the Sunshine Choir has made a splash at various musical events. Among others, it won first prize at a recent city-wide competition, and won first prize in the Vocal category in the provincial Children's Arts Showcase.
The Sunshine Choir sings of the wide ocean and the immense forest, delights in the sunshine, and celebrates the seasons. Music - harmony - joy - happiness! 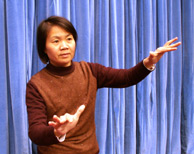 Ms. Qiu Xiaoming is the Haimen Experimental School's music teacher and the founder of the Sunshine Chorus. She is the member of prestigious Chinese Musicians Association - Jiangsu branch. Ms. Xiaoming completed her studies and graduated from Nanjing Normal University Music Department of Education, and won first place in the Nan Tong City Music teacher basic skill competition in 1997.
She studied vocal music under the renowned Hu Jingfang, and piano under Qian Qi, both vice-professors at the Shanghai Music College, and was named among the top ten singers of Jiangsu province.
Ms. Xiaoming also studied under Zhu Mingguan and Zhu Xiuwen, two professors specialized in choral directing. She and her choir have performed and successfully competed on many occasions and at all levels. Her chorus won First Place at the Children's Art Exhibition Performances in 2006.