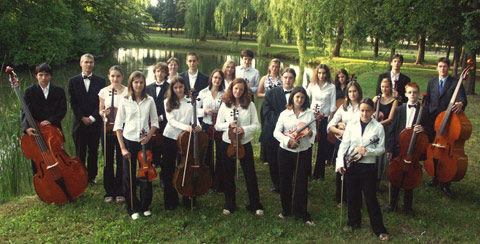 The String Orchestra Primavera is one of today's best student orchestras in the Czech Republic. The twenty orchestra members, mostly students or graduates of the fine arts school Na Strezine, range in age between 12 to 25 years.
Since 1988, the orchestra has been conducted by Jaromir Krovacek, professor at the University of Hradec Králové, Department of Pedagogy. He is a graduate of the Academy of Performing Arts where he studied violin and viola.
The repertory includes artworks from the Baroque era through 20th century contemporary music, including various modifications of pop and jazz music.
The String Orchestra Primavera has participated in a number of concerts in the USA - Texas (1995, 2000), Missouri, Illinois, Tennessee (2005), as well as in Switzerland, Germany, Austria, Poland, France, Belgium, and the Slovak Republic. The orchestra has won First Place in the Czech Republic's national orchestral competitions three times, in 2000, 2003 and 2006, and First Place "cum laude" twice at the European Youth Music Festival in Belgium, in 2005 and 2007.

The String Orchestra Primavera is supported through a generous grant from the artistic and cultural fund of the town Hradec Králové. 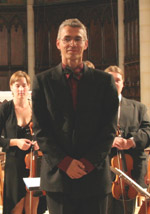 The leader MA. Jaromir Krovacek, graduated on Academy of Performing Arts, employed in Pardubice Philharmonic orchestra, the Philharmony of Hradec Králové and the Conservatory of Pardubice. Nowadays he is a of college tutor on University of Hradec Králové, Department of Pedagogy, where teaches the subjects of violin and viola studies, the chamber music, improvisation, methodology and orchestra music. On the Basic school of arts he conducts the cord orchestra Primavera.