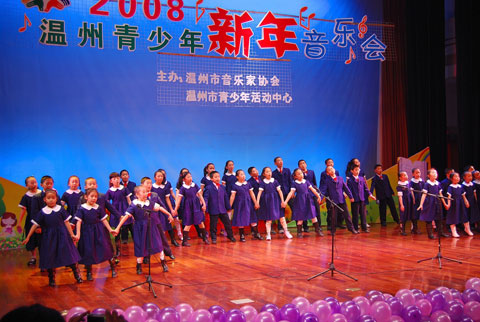 The Wenzhou Dandelion Choir Group was established in 2006 under the auspices of the Wenzhou City Teenagers Association. There are a total of 38 members in this choir, all of whom have been selected from the top students in the Wenzhou Primary and Middle Schools. They practice and train outside of regular school hours - and with success: already the Wenzhou Dandelion Choir Group has won top awards at various important music competitions both nationally and beyond China. The Choir has won first place at the second Shenyang International Teenagers Music Festival in 2007, as well as the "Golden Buddha" prize at the Hong Kong Teenager Music & Dance Festival in 2008.

Born in 1977, Liu Jia has already built a brilliant musical career. She is a member of the following organizations: the China Choir Association, the China Education Association, the Chinese Musical Education Association for Teenagers. In addition, she serves as the general director of the Choir Association of Wenzhou City.
But it is as the Conductor of Wenzhou Young Pioneers Choir that Lin Jia has been able to parlay her great passion into the musical education of teenagers. She has participated already in so many important musical activities and competitions with the Choir: for instance, she has been awarded the Golden Cup at the No.2 "Spring of Western China" Choir Competition and received the Best Conductor Award at the Sixth Chinese Teenager Karaoke TV Show.
The "Moden Girl Time" performance has won the Gold Song Prize at Second Shenyang International Teenager Music Festival, and "Hand in Hand, Our Homeland More Beautiful" has won the Top Choir Prize at the Seventh Hong Kong Golden Bauhinia International Teenager Music and Dance Championship.