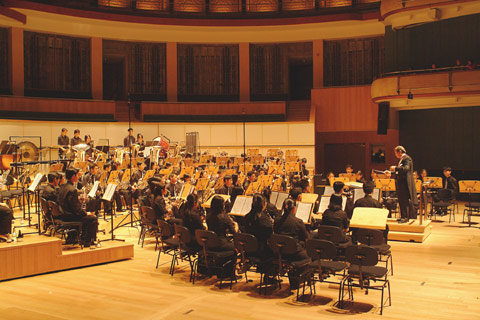 Established in 2002, the Nanyang Polytechnic Symphony Orchestra (NYPSO), comprising both the wind and string sections, has grown both in size and repertoire to become the first polytechnic symphony orchestra in Singapore.

Our Wind Orchestra made its public debut at the 1995 NYP Graduation Ceremony at the Kallang Theatre. It went on to stage the inaugural "SINFONIA" public concert at the Singapore Labour Foundation Auditorium in December 1995. This was followed by its maiden trip - an enriching 7-day Hong Kong Music Exchange tour and in June 1997, the Orchestra undertook an 8-day Thailand Music Exchange Tour hosted by Chiangmai's Premier Montfort College Band. As the Orchestra grew in strength and experience, it became a familiar sight at performances held at public venues like the Esplanade, Singapore Botanic Gardens and the Orchard Youth Park.

As with the other student clubs in NYP, the Orchestra has been encouraged to engage the community, in this case through music, and do their part for charity. Since its inception, the Orchestra has performed at various charity events. Some of these include the fund raising Hospice Charity Concert in April 1999, that saw them raise about $8,000 in support of the hospice patients in Singapore. They were also invited to perform at the Singapore Esplanade Concert Hall in a charity concert entitled "Music from the Hearts 2003" in aid of the Community Chest.

Following the Tsunami tragedy in December 2004, many NYP students and staff were looking out for ways in which to do something for the communities ravaged by the disaster. For the Orchestra, their attention naturally turned towards their upcoming concert in February 2005. Despite that fact that they only had about a month to go before the concert, the Orchestra, with the support of the staff and students of the Polytechnic pulled their resources together to raise more than $20,000 for this cause. Sinfonia 2005 was very well received by the wide-ranging audience comprising students, staff and industry guests.

The Orchestra has managed to sustain their community service efforts and performs regularly at community events, in particular, those that involve senior citizens. More recently, they have embarked on a music exchange programme with several secondary school bands, in an effort to reach out and promote interaction amongst student musicians.

Thanks to the support of NYP's senior management, the Orchestra continues to enjoy opportunities to enrich their musical journey. The Australian International Music Festival held in Sydney in July 2004, provided members the once-in-a-lifetime chance to perform at the Sydney Town Hall, Darling Harbour and at one of the world's renowned arts performance icon venue, the Sydney Opera House. 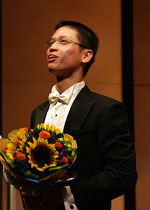 Leonard Tan enjoys an exciting professional career as conductor, performer and music educator.
In addition to Nanyang Polytechnic, he is also music director / resident conductor of the National University of Singapore Wind Symphony, The Philharmonic Winds, and has held faculty positions at the Nanyang Academy of Fine Arts and LASALLE College of the Arts. Most recently, Mr. Tan has been appointed conductor of the Singapore National Youth Sinfonia, one of the two national youth orchestras in Singapore, a National Project of Excellence.

Highlights of Mr. Tan's multi-faceted career include conducting professional Singapore Symphony Orchestra musicians in a Singapore-Japan Composers Exchange Concert and Singapore National Youth Orchestra musicians in the prestigious "Ong Teng Cheong Concert." He served as an assistant conductor in a production of Puccini's opera Madama Butterfly, where he worked with an international cast, choir and orchestra. Soloists he has worked with include American saxophonist Vince Gnojek, Korean pianist Hae-Jung Kim, and the world famous Boston Brass.

Mr. Tan's work as a conductor has received praise from the press. Singapore's Straits Times commented on his "well-studied and disciplined performance, bringing out a range of sonorities," and additionally noted his "highly spirited performances." He has conducted several well-received performances in such venues as the Issac Stern auditorium of the Carnegie Hall in New York, the Sydney Opera House in Australia, and the Esplanade Concert Hall in Singapore.

Trained in his formative musical years in the violin and tuba, Mr. Tan studied harmony with well-known composer Leong Yoon Pin before going on to obtain the Licentiate of the Royal Schools of Music, Licentiate of Trinity College London, and a First Class Honours in Music from the University of Wales, UK. He was also a recipient of the WASBE conducting scholarship. Ensembles under his direction have achieved several prestigious Gold, Gold with Honours, and Gold with Distinction awards at festivals and competitions. Professional affiliations include CBDNA, WASBE, MENC, and The Conductor's Guild.

A. Reed: "A Festive Overture"