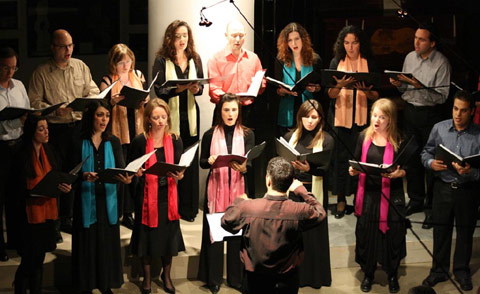 The Ensemble cosnists mainly of graduates, as well as currently active students of the Aristotle University of Thessaloniki School of Music. It was founded back in 1994 by its first conductor, professor Trissevjeni Kalokyri. Formerly known as the "Small Ensemble of the School of Music", it was renamed after the premature death of Mrs. Kalokyri at the age of 50, in June 2006. Since 1994 it has given over 100 concerts in Greece and abroad (Italy, Bulgaria, Cyprus), always raising favourable comments and reviews. It has appeared in numerous TV and Radio broadcasts and has recorded 2 CDs. Its repertoire spans from ancient greek and early european music to contemporary works, some of which are composed for the Ensemble by prominent greek composers.

The "T.K." Vocal Ensemble wishes to honour the memory of its first conductor by carrying on her inspired work and vision.

Countertenor Nicholas Spanos studied with Helen Lionna and Aris Christofellis in Greece. In 2000 he continued his studies at the University of Maryland School of Music (U.S.A.) in the studio of Linda Mabbs, as a scholar of the "Friends of Music" society of Athens; he also held an assistantship from the University. He graduated in 2002 with a Master's Degree on Voice / Opera Performance. He has participated actively in many vocal masterclasses taught by prominent teachers, such as Kurt Equiluz, Delores Ziegler, Anna Tomowa - Sintow and Michael Chance. He has been acclaimed for his appearance in opera, oratorio and recital. Both Greek and international Press has commented on his vocal and stage presence very favorably. He has collaborated often with then National Opera of Greece, the Athens Megaron Concert Hall, the Athens State Orchestra, the Thessaloniki State Orchestra, the Orchestra of Colours, the Bach Sinfonia (U.S.A.) as well as smaller old music ensembles both in Greece and in the U.S. Since 2002 he has been a regular collaborator of the "Ex Silentio" and "Latinitas nostra" early music ensembles. In November 2002 he was awarded the "Best Young Artist of the Year" award by the Association of Theatre and Music critics of Greece, for his interpretation of the role of Arsamene in Händel's "Serse" in the National Opera of Greece. In the autumn of 2006 he was awarded first prize at the "TECHNI" National Competition for Lyric Singers, held in Thessaloniki. He has participated in the CD recording of Händel's "Oreste" (2004) and "Tamerlano" (2006) by the German label MDG.

Formerly a singing member of the "T.K." Vocal Ensemble, he assumed the direction of the group in 2006, filling the position of Trissevjeni Kalokyri, the founding conductor of the Ensemble, that passed away at the age of 50. He has organized and conducted 3 concerts since December 2006.