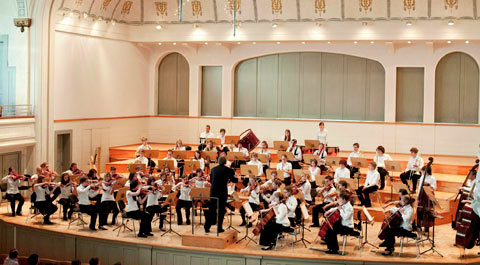 ”il mosaico” is one of the leading youth orchestras of Switzerland. In November 1998 ”il mosaico” was awarded a prize for Outstanding Performance in the category Serious Music‚ by the International Lake Constance Conference and in May 2000 they won the first prize in the category “Symphonic Orchestras” at the Swiss Youth Orchestra Competition. ”il mosaico” was founded jointly by Wattwil High School and the Toggenburg Music Academy in 1990, in order to give students from this rural region the possibility to study and perform more demanding works of orchestra literature. The members of the orchestra are aged between 14 and 22. They meet every week for rehearsals, which are supplemented by special rehearsals before concerts and a yearly music week. Since its foundation ”il mosaico” has been directed by Hermann Ostendarp. He is supported in his work by Wilfrid Stillhard (wood instruments) and Martin Winiger (brass instruments).

Concerts in Swizterland and abroad
”il mosaico” regularly performs in the region where the students live, but also in all big cities of Switzerland, like Zurich, Lucerne, Berne, Geneva, Bale and St. Gallen. Trips abroad have taken the orchestra to Poland, Hungary, Germany, Sweden, Austria, Spain, Italy, Holland, Belgium, Croatia, Rumania, Ukrainia and France. In 2000 ”il mosaico” was on a three week tour in Brazil with 9 concerts in cities like Sao Paolo, Recife and Joao Pessoa. In 2008 the orchestra was invited to New York City to collaborate with Third Street Philharmonia, the top ensemble of Third Street Music School Settlement in New York City (www.thirdstreetmusicschool.org). Under the patronage of Maestro David Zinman, conductor and Ambassador Christoph Bubb, Swiss Consul General in NYC they played five concerts.

Awards
In 1993 ”il mosaico” was invited to play int the Zurich Tonhalle at the Jecklin Meeting of Youth Orchestras (CD and radio broadcast). 1995 and 1998 the orchestra was selected by the Association of Swiss Music Academies to represent Switzerland at the 4. and 5. EuropeanYouth Music Festival in Budapest and Barcelona, respectively. In November 1998 ”il mosaico” was awarded a prize for outstanding performance in the field of classical music by the International Lake Constance Conference In April 2000 Swiss Radio DRS broadcast a 40 minute portrait of the orchestra. In the same year ”il mosaico” was awarded ther first prize in the field ”synphonic orchestras” at the Swiss Youth Orchestra Competition. Invitation of Heinz Holliger and Andras Schiff at their famous Chamber Music Festival, "Ittingen Pfingstkonzerte 2003", and at the LUCERNE FESTIVAL 2004 to perform on both occasions ”Brundibar” – Childrens Opera from Terezin from Hans Krasa. At the „Internationales Bodenseefestival“ in 2003 and 2004 invited to play.
For more information, please have a look at: www.ilmosaico.ch 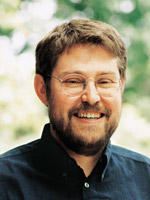 • born in 1959
• grew up in Waldniel (Germany)
• studies in Bern, Köln, Zürich
• composition studies with Gerald Bennett
• additional studies: violin - with Sandor Zöldy (Vegh-Quartett), choirconducting - with Sean Deibler (Philadelphia Choral Society), orchestraconducting - with Prof. Karl-Heinz Bloemeke (Detmold), baroque and classical informed playing - with John Holloway (u.a. Leader of Taverner Players and London Classical Players)
• violin- and violateacher at the Musikschule Toggenburg (since 1982) and at the Kantonsschule Wattwil (seit 1990)
• since founding in the year 1990 conductor of Jugendorchester "il mosaico":
- building up the orchestra and it's preparation ensembles (ABC-Streicher, Intermezzo, Vivaldissimo)
- organisation of concerts, music camps, exchange programmes, journeys
- chosing of repertoire, planning of projects of “il mosaico”
- different prizes and awards with “il mosaico”, i.e. 1. Prize in the Swiss National Competition for Youth Symphony Orchesteras in 2000.
- concerts with “il mosaico” in all major swiss towns, abroad in Europe (13 countries) and in Brazil
• guest conductor in projects of orchestras/choirs in Switzerland, Poland, United States and Brazil