Beijing Zhongguancun Middle School Choir was founded in 1991 and has 80 members now. The choir aims at improving students’ art attainment, warming up cultural atmosphere on campus, as well as developing high-level and various chorus style. For the 18 years since its foundation, it has been instructed by many famous conductors both at home and abroad. It has won the First Prize in the Primary and Secondary School Students’ Choir Competition of Haidian District for 13 times and of Beijing for 5 times. Besides, it has been honored the Golden Award in French Folk Art Festival in 2002. The choir has successfully held two choral concerts in Beijing Concert Hall and been invited to perform in several major national activities, such as the Macao Return Ceremony. It also has visited North Korea, France, Germany, Belgium, Finland, and carried out cultural exchanges with Japan, the United States and other countries on many occasions. 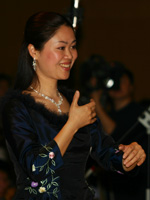 Tan Tianjing studied with Chinese famous conductor Sang Yesong, Wu Lingfen and well-known Japanese conductor Mr. Sakurai. As a national teacher, an outstanding youth of Beijing intellectuals, and a pioneer worker, she was also honored the best Conducting Award in Beijing primary and middle school students’ Choral Festival, the First Prize in Competitions of the National Primary and Secondary School Music Teaching, and national outstanding Music Thesis Competition. Under her conduction, the choir has won the 1st Prize in the primary and secondary school students’ Choir competition of Haidian District for14 times and of Beijing Ciry for 5 times.