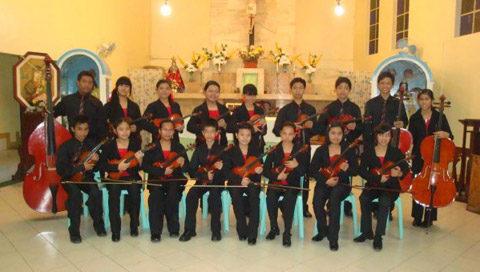 In 1999, 66 students at the Sta.Peregrina Learning Center (ranging in age between 4 and 5 years) started playing with old and borrowed lyres. After just six months of playful experimenting, these children were making music - delighting the residents of Malabon, The Philippines. The first edition of Musikito was born when this children's band was named "Musikito: ang batang musiko," which means "A band of child musicians or little band players" and connotes a younger version of the older "Musiko" that Filipinos listen to during fiestas and other occasions.
Soon, the Musikito group played a major concert at the Concert at the Park, and went on to perform in other venues. After a brief hiatus, the Musikito started again in 2002, with a more profound commitment to music, the arts and the future of the group. In April 2003, 19 members of the Musikito started violin lessons with Ruby Natividad, followed by 14 more students a few months later.
In 2003, the Musikito expanded program, led by Jojo Gungon, was launched. Thanks to instruments donated by the Kokusai Koryu Club of Hiroshima, Japan, through the efforts of Ariel Sta.Ana (principal clarinet of PPO), the Musikito Melodion/Recorder Group (28 members) was born. A year later, the Musikito received another donation of musical instruments from the G.A.Yupangco, and the Musikito Percussion Group under Bernardo dela Cruz Jr. was organized.
In March 2005 the Musikito Violin Group was dissolved since 19 of its 25 members found their new home at the Manila Philharmonic Orchestra of Rodel Colmenar. However, a new violin group was organized, and it was transformed into a string orchestra. Since November 2007, the Musikito String Orchestra consists of 24 regular members ranging in age from 10-15 years old. The orchestra has a broad repertoire, including European classics, Chinese and Japanese songs, Filipino classics, OPM and other foreign pop music. To continue the Musikito program, we do believe that we have to establish a new kind of music school, especially intended for disadvantaged children. The experience and lessons we have learned with the start-up of this program have inspired us to contribute to the field of music education.
At present, we are training Batch 6 (18 members), Batch 5 (13 members) and Batch 4 (11 members) to play violins. A new batch of Melodion/Recorder Group (47 members) between the ages of 6 to 9 years old is also being trained, as is the solfeggio class with 53 pupils whose ages range from 4 to 5 years old.
It is our aspiration that the Musikito will use what they learn - discipline, love for the arts, their musical skills - to open doors to bigger opportunities and apply for college scholarships. 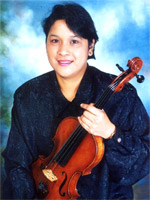 At present, Michi is teaching full-time and is chair of the Strings and Chamber Music Department of the U.P. College of Music and has been co-faculty in charge and conductor of the U.P. Symphonic Orchetra and the U.P. String Chamber Orchestra respectively. Michi continues to keep active her career as a Musicologist. She was part of the Research Team for the Smithsonian Folklife Festival that featured the Philippines in 1998 at Washington D.C., USA. Michi was also the music researcher of the museology team that established the Museo Ilokos in Laoag, Ilocos Norte in 2000. She has just co-authored the book on Marcelo Adonay, a leading Filipino composer in the early 19th century. The first volume is being published by the U.P. Press and will be out mid-part of this year.